Skip to main content
Submitted by Matthew Johnson on 03 Nov 2009.

On November 5, MNet Media Education Specialist Matthew Johnson participated in the Association of Canadian Studies’ conference Knowing Ourselves: The Challenge of Teaching History of Canadian Official Minority Language Communities, speaking on the topic Media, Diversity and Our History. What follows is an expanded version of his remarks.

The connection between history and media education may not be an obvious one. Mass media are, after all, a modern phenomenon, and when media is discussed in most history courses it’s almost always in the context of the meaning or significance of particular media products. But media studies aren’t just about media products: it’s about how different media shape how we think and how we see the world.

To begin with, students see the world through media. If they have any prior knowledge of history, it likely comes from movies or TV – and we have to be aware of the ways that affects how they see history. Not just the factual errors and misconceptions found in movies on historical subjects, though there are certainly plenty of those, but the assumptions and implications that come with a medium and genre. For instance, you’ll never see a historical film that tries to communicate how people in the past thought or saw the world differently than we do. You couldn’t possibly understand the Middle Ages, or Ancient Greece, without having some knowledge of their mindset – but when those periods are portrayed in the mass media the characters are fundamentally modern people with funny clothes. This isn’t just a consequence of bad filmmaking, it’s a consequence of commercial filmmaking as a genre and a medium: to be successful a movie has to appeal to as broad an audience as possible, and having characters with motivations and thought processes that are difficult to understand is going to make that more difficult. (So it is that we wind up with freedom-loving, non-pedophilic Spartans in movies like 300.) This is where media education can help students ask the critical questions needed to challenge and contextualize historical depictions such as these.

We frequently use media products to teach history, and not just movies and TV shows. Another medium that we deal with in history, especially at the secondary level, is the textbook. These, too, we tend to take for granted, but as with other media, they reflect their medium and genre. If students are going to not just memorize facts but actually do history, they need to learn to read textbooks as a media product and not just a text.

Most importantly, in a very real way history is media study. As historians we look at media products – the primary sources on which history is built – and ask questions like Who wrote this? What purpose did it serve? In what context was it written? Is there any reason to believe it’s misleading or biased? What’s missing from the story it tells? These are, in fact, all essential media studies questions. For most of history, the sources that have reached us are those that were written down, copied and preserved: each of these has a significance that may not be immediately obvious today. When literacy was rare, to make a written document had a significant cost; so, too, did copying a document before the invention of the printing press. These facts mean that a primary document isn’t simply a neutral record: it embodies a power structure, an economic system and a point of view. It is not unusual for us to question the role of media – such as radio, television and the Internet – in shaping our perceptions of modern history. The same scrutiny needs to be given to the primary documents from which we form our understanding of the past.

How can history teachers integrate media education into their classrooms?

Teachers do not have to be media experts to bring a media education approach to their practice. Media education is fundamentally about asking the right questions, not knowing the right answers, and we can draw those questions from five key media literacy concepts:

Media are constructions. Media products don’t just come into existence: they are created by human beings. They have a purpose and are made with particular forms and techniques. Teachers can have their students consider the decisions that were made in creating a media product as well as the factors that influenced its production. Consider, for instance, the Lawrence Olivier version of Henry V: how did its purpose (to inspire the British public) affect its content? What were the effects of the circumstances of its production (it was made during the German attacks on England, at a time when there was fear of a full-scale invasion)? Compare the climactic Agincourt scene to the same scene in the Kenneth Branagh version. How does the same essential content communicate very different meanings in the two texts?

Audiences negotiate meaning. The meaning of a media product is not static: it is created in collaboration with the audience, and different audiences interpret media differently. This is why to fully understand the effects of stereotyping and absent voices we have to try to see things from the perspective of those affected. Take, for instance, the famous painting of the Death of Wolfe, which is often presented in textbooks as the moment when Canada was born – in English-language textbooks, at least: 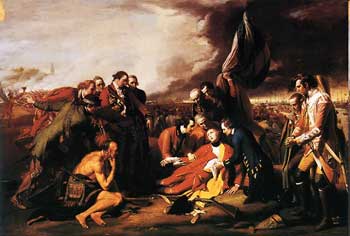 How would a francophone student interpret this image differently? Look at the Native character to Wolfe’s left – how would a Native student view this painting? How would an African-Canadian student feel about being portrayed as absent from the “birth of Canada”? Consider, too, that we are not the painting’s original audience: we are different from those who first saw it in the 18th Century, those who canonized it in the 19th, or those who enshrined it in textbooks in the 20th Century. 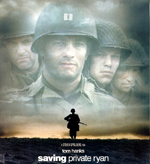 Media have commercial implications. Few media products are created without some economic considerations. Most of the media products we use in classrooms are created to make money, and that affects how they are made. Even the most faithful historical movie has to follow the “Hollywood format”: consider how the very bleak, chaotic and realistic opening scene of Saving Private Ryan is followed by a much more standard action-adventure film that rewards audiences in a more comfortable and familiar way. As far back as Herodotus history has been written as entertainment, and this shapes our study of it.

Textbooks have commercial implications too: students should find out who at their school or school board makes the decision about which textbook to buy, and consider how that might have influenced what was left in and left out. James W. Loewen’s excellent book Lies My Teacher Told Me examines just this question, and while the textbooks we use may not be as egregious as some of the examples he cites (such as a history of Mississippi that did not mention a single African-American), some of the reasons he identifies for why particular facts are included or left out of textbooks may be more familiar (for instance, U.S. history textbooks must devote space to Chester A. Arthur – an entirely forgettable president – if they hope to sell copies in Vermont, his home state.)

Values and ideological messages underpin all media.Even if media products are not created to promote a particular agenda – as nearly all primary sources, and most textbooks, were – the cultural values and assumptions of their creators are inevitably reflected in the text. This can be a difficult concept for students to grasp for the same reason that fish don’t know they’re in water; most often, the assumptions found in the media works we consume are the same assumptions we ourselves hold. It takes an intentional change of perspective in order to even recognize that we have these assumptions, never mind challenging them. 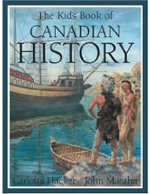 Consider, for instance, the cover of this Canadian history textbook for Grades 3-8. Not that it’s precisely inaccurate (though I don’t think any coastal Native peoples wore feather headdresses of this type), but by its selection of this image it glosses over the fact that most of the Native peoples that the early Canadian settlers dealt with, such as the Iroquois and the Huron, were settled, agricultural societies. Undoubtedly neither the author, illustrator nor publisher had any intention of demeaning or misrepresenting Natives; it is the fact that this familiar image went entirely unquestioned that shows how important it is to consider the assumptions and values that lie behind each media product. (This textbook was published in 2002, by the way.)

Each medium has a unique aesthetic form. The medium in which history is written or told influences its meaning. A history textbook will follow different codes and conventions than a movie, or a comic book. These conventions can have a significant effect on the meaning we take from a text. For example, consider this photo of the Charlottetown Conference: 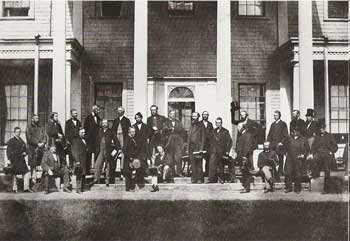 The posed quality of 19th Century photos, as well as the lack of colour, contribute to a received meaning of the event as being sober and serious – one that’s entirely at odds with the fact that everyone in this picture was hung over when it was taken.

Textbooks, too, have their own aesthetic form. Nearly all are locked into a strict chronological format; not an unnatural choice for history, but also not always the best way to discuss or explain complex processes and events. Textbooks have a number of genre conventions as well: James Loewen has pointed out that textbooks rely heavily on the passive voice – “chaos seems always to be breaking out or about to break out” – obscuring the genuine causes (and the debate that surrounds possible causes) of events.

Teachers wanting to bring a media education approach to their history classrooms can get started with some of MNet’s resources. To begin with, the presentation Media Education: Make It Happen, available as both a booklet and a slideshow, covers the media education content of this blog in more detail. Several of the lessons in MNet’s Lesson Library deal with these topics as well: for instance “Hurricane Katrina and the ‘Two-Photo Controversy’ ” examines how in the aftermath of Hurricane Katrina, media coverage – the first draft of history – reflected the bias and assumptions of the mainstream media. The lesson “Suffragettes and Iron Ladies”examines how both history and new media reflect bias in their coverage of female politicians. For a broader examination of these issues, teachers can consult our Media Issues section on Stereotyping. Finally, to help students understand the potentially touchy subjects of prejudice, bias and misinformation, teachers can use the educational game Allies and Aliens which addresses these issues through a science-fiction metaphor.