Skip to main content
Submitted by Matthew Johnson on 02 May 2008.

Note: this is the fourth in a series of blogs looking at the history and future of Web 2.0 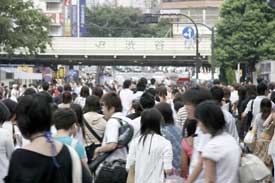 In our last instalment we contrasted the “hard path” of user-created media – which requires would-be creators to be highly talented, skilful, committed, or all three – with the “easy path” of services which make it possible for more people to create media. In this column we’ll be looking at a method which aspires to make everyone a creator: crowdsourcing.

As with other aspects of Web 2.0 we’ve examined, the origins of crowdsourcing go back to the beginnings of computer culture – and betray a split within that culture. In this case the split, which began in the early 1980s when personal computing began to become a commercial industry, is between those who viewed computer code as a proprietary possession and those who believed that it should be accessible to all. As the industry became more and more profitable, the former camp was in the ascendant – both Microsoft and Apple maintained corporate control of their operating systems – but the other side never entirely went away. Instead it evolved into the Open Source movement (named after its assertion that source code, the programs that made up an operating system, should be open to all) and spawned a series of alternative operating systems, culminating in 1991 with Linux.

What made Linux different from either the Mac or Microsoft operating systems was that it was collaborative – while its development had begun with one person, Linus Torvalds, it was completed by any number of programmers who debugged, refined and improved it. Because of this Linux was more easily customizable to various applications than other operating systems, and many believe that it is debugged and updated more quickly. More relevant to Web 2.0, though, is the way that Linux became almost a totem for many people in computer culture: proof that great things could be done by a community instead of a corporation.

The early 1990s were, of course, the beginning of the Internet era as well, and it was there that the Open Source movement found its spiritual home. The two-way nature of the Internet – more like a telephone than a television, as Scott McCloud has pointed out – made it a natural forum for collaboration right from the beginning. Nearly all Web services that survive from that period involve some degree of user creation, such as the customer reviews on Amazon. As a larger number of people began to go online some sites began to use open source principles in unexpected ways – sites like TripAdvisor, for instance, which compiles customer reports about hotels and other travel amenities. In 2006 Wired writer Jeff Howe coined the term crowdsourcing (by analogy to outsourcing) to refer to a business model in which the content is created, either for small payments or for nothing, by a large number of users not formally affiliated with the company.

Today new experiments are pushing crowdsourcing in ways unforeseen even two years ago. For one thing, many of the new crowdsourcing sites are non-commercial. Front Porch Forum is a site that aims to use the Web as a “virtual front porch” – in fact it’s a bit more like a community newspaper or bulletin board, with messages such as “Looking to borrow a car seat” and “Yes to new sidewalks.” The makers of Front Porch Forum provide nothing but the forum itself; all of the content is provided by the residents of the town or neighbourhood. Perhaps unsurprisingly, Front Porch Forum originated in Vermont, not the most urban state in the union; how it will work in urban neighbourhoods, when it expands beyond its pilot city of Burlington, remains to be seen. If nothing else, though, Front Porch Forum provides a model for a non-commercial crowdsourcing, as well as a means of using the Internet – so famously able to connect us with people from around the world – to put us in touch with our neighbours as well. Whether this will lead to actually talking to our neighbours face-to-face is another matter. (Given the incredible boom in online worlds aimed at children, can the virtual play-date be far off?)

A site that takes crowdsourcing in a different direction is Patients Like Me, a site that allows sufferers of a variety of diseases (at the time of writing ALS, HIV, Multiple Sclerosis, mood disorders and Parkinson’s Disease) to connect with one another. Like Front Porch Forum, Patients Like Me has its antecedents in the world of bulleting boards and discussion groups; what makes it different, beyond the scale on which it operates, is the focus not just on sharing experiences but on compiling data on treatment options. By allowing patients to compare the effects of various treatments, it also allows them to advocate on their behalf – to ask to be given treatments that seem to be more effective based on the data they’ve seen on the site. To make this work, members are required to submit not just subjective accounts but specific information on drugs, dosage, strength and duration of effects, which the site then compiles into a common database. So much data is involved, in fact, that two significant concerns have arisen. One is the loss of privacy about medical information – a crucial matter in the United States, where disclosing medical information can lead to a denial of insurance coverage; the other issue is that users will begin to use Patients Like Me as a substitute for professional medical advice rather than as a supplement. The site tries to address both concerns in their “small print” pages: their Privacy Policy says that “PatientsLikeMe will never rent, sell or share information that personally identifies you for marketing purposes,” but admits a line later that “We do, however, provide Personally Identifiable Information and non-Personally-Identifiable Information to approved vendors for PatientsLikeMe email communications and other PatientsLikeMe internal programs.” The User Agreement, meanwhile, is careful to note (in capital letters) that the site does not provide medical advice. Nevertheless, it’s clear that many users are relying on the site for exactly that: The New York Times reported that more than a hundred ALS sufferers on the site had begun to use Lithium, a drug not normally prescribed for that condition, on the basis of an unpublished Italian study whose early results were being published on the site.

Perhaps the ultimate example of crowdsourcing is Wikipedia, the user-created encyclopedia. Wikipedia is, in fact, more open-source than either Patients Like Me or Linux – more akin to Front Porch Forum, in fact, in that the site provides only the architecture, none of the content. All of that is left to the users, who create, alter, edit and occasionally delete entries. Its accuracy is a matter of debate: a study reported in the magazine Nature stated that it compared favourably to the Encyclopedia Britannica, but that study – which has been accused of being flawed by the Britannica’s publisher – looked only at science-related articles, which tend to be less subjective. In more controversial topics, such as the presidential nomination race between Hillary Clinton and Barack Obama, “editing wars” erupt as each side tries to promote its own position, or at least keep the text neutral.

Interestingly, Wikipedia founder Jimmy Wales has stated that he dislikes the term “crowdsourcing,” contrasting the businesses that were originally described by the word with his non-profit venture. Wikipedia describes itself not as “the crowdsourced encyclopedia,” or even “the open-source encyclopedia,” but “the free encyclopedia.” Though Wikipedia is free to use, it is also free of corporate oversight or control; while not all users are equal, all do have a voice. For Wales, and for most open-source loyalists, that freedom is worth whatever loss of accuracy it may cost. In our next instalment we’ll look at whether user-created content can succeed in an area where accuracy and trust are the most valuable currency: the news.