Skip to main content
Submitted by Andrea Tomkins on 16 Jul 2015.

One of the challenges of being a parent in a digital age is (a) keeping up with all the new tools and websites and social media channels our kids may or may not be using and (b) keeping track of new developments and updates within existing tools. Honestly, sometimes it feels like I’m trapped inside a 21st century hamster wheel!

But it’s worth staying on top of things because lots of these changes are important for parents to know about, like the new Bulk Block tool that Twitter has just released to combat harassment on their platform.

The beauty of Twitter is that anyone can open a free account, and publish almost anything they want. Unfortunately this freedom comes with a cost, when some people (aka trolls) use Twitter to post harassing and abusive messages. And these hurtful tweets can seriously impact recipients.

Celebrities are particularly attractive targets for trolls. For instance, in March, it was reported that Ashley Judd was pressing charges against Twitter users for sexual harassment, and Lena Dunham said she deleted Twitter because “I’m trying to create a safer space for myself emotionally.” (Dunham is now back on Twitter.)

This kind of harassment isn’t limited to celebrities, so in an effort to make their platform a safer place for everyone, Twitter’s new Bulk Block feature makes it easier to block several accounts at one time and then share these lists with others. 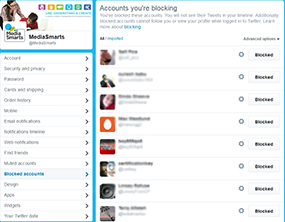 Although the existing Mute and Block features work well for most citizens of Twitter nation, this advanced feature lets people who’ve had to endure ongoing harassment and high numbers of unwanted tweets take control of their Twitter experience and banish the trolls. Giving users the ability to share block lists is also a positive step in the right direction: it’s easier, faster and community driven. I predict crowdsourcing the trolls is going to become a big thing. (Can someone please create a giant master list of trolls that I can import already?)

Of course while blocking people and sharing lists of trolls is helpful, it doesn’t solve the root of the problem: cruel people who get their kicks from demeaning others in a public way. To make our online communities safer and more respectful we need to work together to promote positive social norms in these spaces. By challenging inappropriate conduct we will all benefit by being able to use platforms like Twitter without fear of harassment – after all, if we have to stop using these tools then the trolls have won.

I adore social media and everything it brings – ideas, inspiration, information, connections. To protect these positive elements I think it`s important to teach kids that all users have a role to play – a responsibility in fact – in making sure that a minority of uncivil people don’t ruin these communities for everyone.