Skip to main content
Submitted by Matthew Johnson on 11 Dec 2009.

It’s a question that most parents of young daughters face: “Has she hit the ‘princess phase’ yet?” Not all parents are upset by this, of course: many happily buy their girls princess costumes, toys and accessories ranging from shoes to purses, all in pink. Some, though, despair of the powerful gender stereotyping this delivers to young girls and each new piece of princess gear can be a source of conflict.

The source of much of this princess culture is Disney, of course, and this winter the studio is extending its reach by introducing its first African-American princess, Tiana, in the animated film The Princess and The Frog. Princesses are big business for Disney: since 2000, when the company began to tie together all the merchandising for any of its characters who might conceivably be called “princesses,” the line has become one of the company’s biggest earners. Disney’s Andy Mooney, who spearheaded the creation of the princess line, told the New York Times that he got the idea from seeing girls at Disney on Ice shows who were dressed in non-Disney princess costumes, but there’s no doubt that in the years since the company has pushed the line into almost every imaginable aspect of a child’s life, from beddings to Band-Aids to lip balm. Not surprisingly, the marketing of Princess Tiana began well in advance of the movie’s December 11 premiere: more than 45,000 dolls based on the character had already been sold by mid-November, while actors portraying her were already performing in “Tiana’s Showboat Jubilee” at Disneyland and Disney World.

The creation of Princess Tiana would seem to be an attempt to expand into the one market as yet untouched by princesses: African-Amerian girls. The official list of Disney princesses includes, along with born princess Snow White and married-to-royalty Cinderella, two entirely non-royal characters, Mulan and Pocahontas, who are Chinese and Native respectively. The last two characters, though, rarely appear on merchandise – less, perhaps, due to their ethnic origin than the fact that neither fits well with the “princess aesthetic”: in their movies Pocahontas appears in tolerably realistic (if somewhat revealing) Native garb and Mulan actively rejects feminine attire in order to masquerade as a male soldier. Tiana, though, is carefully crafted to fit the princess mould, with an hourglass figure, many glamorous dresses, and even a tiara. Of course, she spends much of the movie in the shape of a frog, but that’s not the image that will adorn lunchboxes everywhere. If the movie is at all successful, an entire new population of young girls will soon have caught princess fever.

Is this necessarily a bad thing, though? After all, princesses – whether born to royalty at the beginning of a story or married into it by the end – have been fairy-tale protagonists for hundreds of years; the characters of Cinderella and Snow White long predate their Disney incarnations. The appeal of princesses is not hard to see: the unearned wealth and privilege of being a princess makes it a close parallel to classic boys’ fantasies of being demigods or orphans rocketed at birth from a distant planet. Where the male and female versions diverge is that where the boys imagine gaining powers and abilities from their special status, being a princess instead brings girls wealth, beauty and romance. It’s not surprising, then, that many parents are concerned about just what gender roles their daughters are being trained to play. 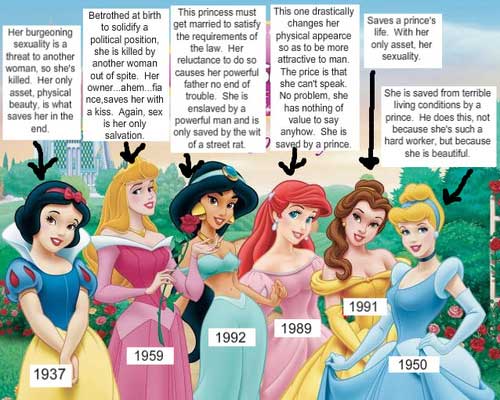 One common feature of the many articles on this phenomenon is that young girls resist any criticism or alteration of their princesses. In the New York Times article cited above, the writer’s daughter asks repeatedly if her mother likes her princess heroines; in her article in The Los Angeles Times Rosa Brooks fails to convince her daughters that princesses are more likely to end up at a guillotine than a fairy-tale wedding; and Tracee Sioux, who writes a blog titled The Girl Revolution, describes her unsuccessful efforts to steer her daughter away from princesses. Nor can girls be easily swayed by stories that try to subvert the classic princess: “Frogs and snails and feminist tales: Preschool children and gender,” a 1989 study by Bronwyn Davies, found that both boys and girls often rejected stories that tried to alter the traditional gender roles found in fairy tales.

Is it really gender roles that children are so attached to, though, or is it the fairy-tale narratives on which they are experts? A recent article by Karen Wohlwend, “Damsels in Discourse: Girls Consuming and Producing Identity Texts Through Disney Princess Play,”finds that while children engaging in “media play” with princess characters feel a strong loyalty to the original narratives, they are not averse to changing things like the gender of secondary characters (turning Prince Charming into a princess, for instance) or making the protagonist more active, especially if that means giving themselves a larger and more entertaining role to play. (One of the girls in Wohlwend’s study finds a way to involve a comatose Sleeping Beauty in a swordfight.)

The children in Wohlwend’s study, though, are kindergarteners; though they might have been exposed to quite a lot of princess-related media by this age, they’re still in the early stages of forming gender identities. As girls get older, the worrying aspects of princess culture – the passivity, consumerism, and so on – may become more and more confining. As Lyn Mikel Brown, co-author of Packaging Girlhood writes, the issue is not princess play but the sheer dominance of princess culture: “When one thing is so dominant, then it’s no longer a choice: it’s a mandate, cannibalizing all other forms of play. There’s the illusion of more choices out there for girls, but if you look around, you’ll see their choices are steadily narrowing.” Her co-author, Sharon Lamb, points out as well that the road travelled by princesses is a narrow one, leading to the hypersexualized roles now being sold to ‘tween and teen girls: “There’s a trap at the end of that rainbow, because the natural progression from pale, innocent pink is not to other colors. It’s to hot, sexy pink – exactly the kind of sexualization parents are trying to avoid.”

How should parents deal with the arrival of the “princess phase”? One option is simply to say “no” – something parents should never be afraid to do. But an outright ban may backfire by making all things princess even more desirable. What may be more effective is to make sure that girls (and boys) are also exposed to more positive female role models. There are many children’s books with strong female characters; kids’ movies with good female leads can be harder to find, but the anime produced by Studio Ghibli – such as Kiki’s Delivery Service and My Neighbor Totoro – is a good place to start.

Most important is that parents engage with their children’s media and be ready to discuss the images and events they see. Don’t be confrontational, but ask questions: do you think you can really make an angry person nice like Belle does to the Beast? Is it worth it to give up your voice, and your family, for a boy the way Ariel does? If Mulan spends most of her movie dressed as a boy, why is she in girls’ clothes on the merchandising? There may be no escaping the “princess phase,” but teaching kids to view media critically can help make sure your princess doesn’t grow up expecting a handsome prince – or a fairy godmother – to solve all her problems.

Teachers can address the presence of gender stereotypes in fairy tales and other children’s media through the less Once Upon a Time (for Grades 2 to 6).

Media Stereotyping: Media Portrayals of Girls and Women looks at the ways that mass media can stereotype girls and women; the effects this can have on girls’ body image, self-esteem and views of gender roles; and provides tips for kids and parents on resisting stereotypes and working for change.

Marketing and Consumerism: Special Issues for Tweens and Teens talks about how young girls and boys are sold rigid gender identities by consumer culture.

Some concerns have been raised about the portrayal of race in the movie The Princess and the Frog. To help kids deal with racial and ethnic stereotypes, consult Media Portrayals of Ethnic and Visible Minorities .

As someone who grew up loving Disney and fairy tales, I cannot say that the princess culture is entirely bad. Then again, I was not exposed in the 1960’s to the mass marketing and dominance that corporations like Disney employ. Disney’s films have sanitized the original versions of the stories but the characters still endure some suffering to achieve their happiness. So, I think that girls can figure out the good and bad aspects of certain choices that the characters make. It’s not the role models that are the problem; otherwise, how would young women of my generation ever pursued careers when their mothers obviously didn’t. I think it’s the consumer aspect that is most disturbing. Disney hasn’t set out to brainwash girls but rather to get them to spend money on their products and in the end, they have achieved both. It is the homogeniety of play culture with its emphasis on consuming that I find so frustrating and so connected to Brave New World. I taught media education for many years in secondary English and one of the ideas that students are most resistant to is the notion that consumers are manipulated. They recognize the hard sell easily and believe that that is enough to say that they are not influenced. The bigger picture is much more difficult for them to grasp.