Skip to main content
Submitted by MediaSmarts on 30 Mar 2022.

Not many words have had a rise as meteoric as the term “algorithm.” Once only familiar to mathematicians or computer scientists, today algorithms are the subject of warnings from scholars and activists, protested by students whose future lives and careers are increasingly determined by algorithmic decision-making, personified and catered to by would-be YouTube stars, and seen as the almost magical element that is vital to the success of newer platforms such as TikTok.

MediaSmarts’ research, however, shows that while Canadian youth are now highly familiar with the idea of algorithms, they have little understanding of how they actually work. When we asked youth to explain what an algorithm was, most shared examples of their interactions with a recommendation algorithm on a platform like Instagram, Netflix, TikTok or YouTube. Most students aren’t learning about how algorithms work, or how they influence their lives or media experiences in school. Instead, they are learning about algorithms primarily from their interactions with them, in fragments and in hindsight. As a result, participants in our research study expressed a sense of powerlessness and a lack of control when it came to the influence and impact of algorithms in their lives.

Recommendation algorithms – which decide what content to show or suggest to you on platforms – are a particular challenge for media education. While they are the kind of algorithm that is most familiar to young people, we mostly know them only by their results. Everything else about them is a mystery: not just how algorithms come to a decision but the reasons why platforms make particular choices in designing them, the way data collected about us influences how they work, and the way that machine learning can lead them to make connections that nobody could have imagined.

Our research did have some positive findings, however. First, young Canadians are interested in learning more about recommendation algorithms. As well, we found that a fairly short, game-based activity was effective in teaching key knowledge and understandings about recommendation algorithms and, more importantly, prompted participants   to ask critical questions about how they respond to and interact with algorithms.

Based on those findings, MediaSmarts is launching #ForYou: A Game About Algorithms. Aimed at young Canadians between the ages of 13 to 18, and designed to be delivered either in school or in community spaces such as homework or coding clubs, #ForYou is designed to increase awareness and understanding about issues around recommendation algorithms including privacy, misinformation and advertising.

Unlike other MediaSmarts games such as Reality Check and Data Defenders, #ForYou is not a digital game. Instead, inspired by classic “deck-building” games such as Pokémon and Bears Versus Babies, the game uses a set of sturdy, attractively-designed cards to simulate the different roles that recommendation algorithms play in delivering videos and ads online.

The purpose of this game is not just to teach players about recommendation algorithms but to get them to reflect on and ask critical questions about the role that algorithms play in their lives. To do that, we wanted #ForYou to be a group experience led by a teacher or facilitator, which is much easier to do when the game isn’t on a screen. And the tactile experience helps make the abstractness of algorithms more concrete.

#ForYou has three phases, each of which introduces a different way in which recommendation algorithms work: 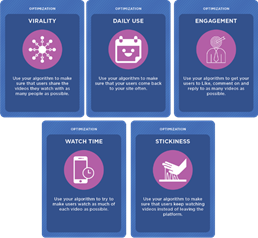 Each phase has two rounds: in the first round players try to find out as much as possible about the algorithm, and in the second round they use what they’ve learned to try to “game” it.

For example, in the Popularity phase, the player designing the algorithm chooses an Optimization card, which represents the different things a platform might use their algorithm to do – to keep them from leaving the site, or to make them come back at least once a day, or get them to watch videos for longer, and so on – and shows it to the other players. 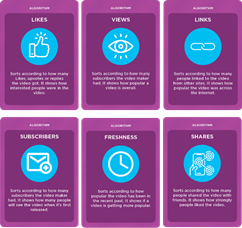 They then design an algorithm using three of the six algorithm cards. Each of these stands for something an algorithm might measure to decide how widely to recommend a video: how many “Likes” it has received, how many people have shared it, et cetera. The algorithm player then ranks these three, from most to least important, and places them face down in front of them. 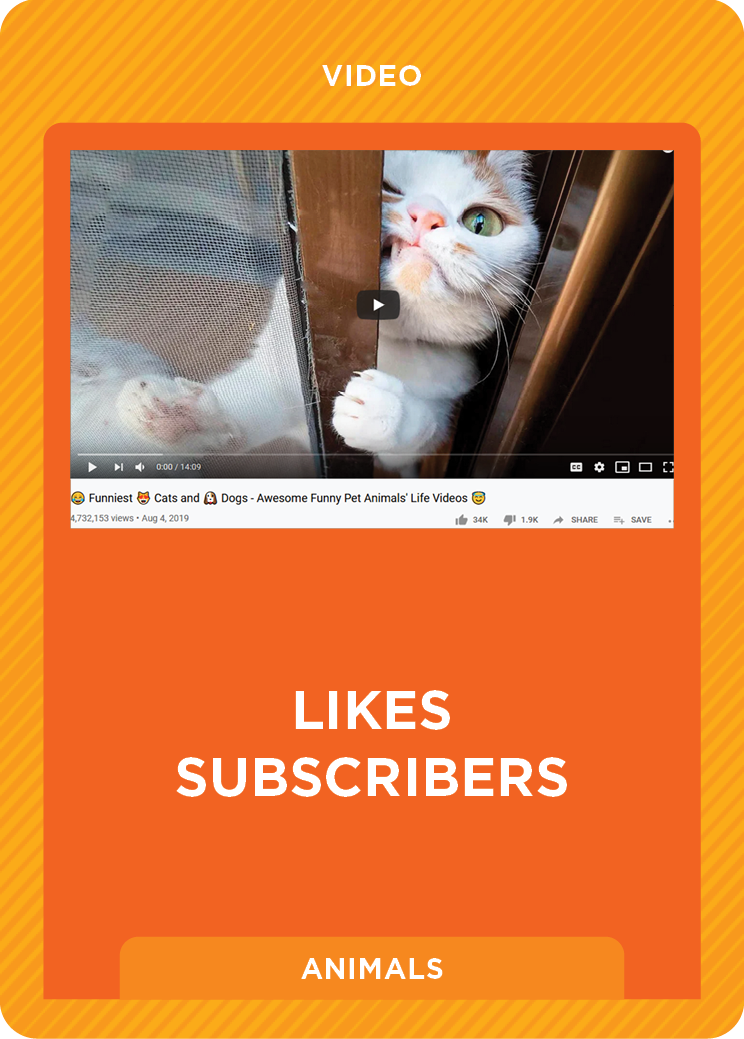 Next, the other players – who are each taking the role of an aspiring video-maker – draw five Video cards and play one. Each video matches two Algorithm cards (for instance, this one matches Likes and Subscribers), meaning it has two qualities that an algorithm might be looking for.

The second round is where players try to “game” the algorithm, guessing based on the scores in the first round which algorithm cards were played and in what order. Based on that guess, they play the two Video cards in their hands which they think the algorithm is most likely to favour. 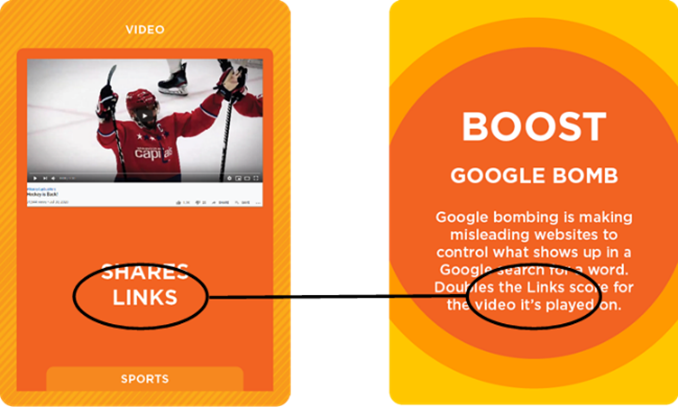 To help players understand that algorithms can sometimes be manipulated in other ways, the game also features Boost cards. These each stand for an “inauthentic” way of making something more popular, such as a “Like Farm” (a group of accounts and devices that are used to fake Likes) or a Retweet Room (groups of accounts that all share each other’s posts, to make them seem like they’re going viral.) Each of these corresponds to a different Algorithm card and doubles the value of a Video card that matches that card.

The second and third phase follow the same basic gameplay, but add new issues and more complexity. In the second phase, the players are advertisers instead of video makers, and use Data cards – which represent personal information about users – to more effectively target their ads. In the third phase players learn about how machine learning can use what is known about a user as a “proxy” for something they don’t know – for instance, using someone’s name to guess their gender, or what websites they’ve visited to guess their sexual orientation – and use that for even more precise targeting.

#ForYou is accompanied by both a lesson plan (for classroom use) and a discussion guide (for use in a home, workshop or community group). Both of these include instructions for not just playing the game but “pre-briefing” before each phase, to help players activate prior knowledge and introduce key information and ideas, and debriefing afterwards to reflect on what they’ve learned through gameplay. We’ve also made videos to help explain the gameplay and even walk you through the discussion questions. As with all MediaSmarts classroom resources, the lesson is linked to curriculum expectations in each province and territory.

From video sites to job applications, from our credit scores to the prices we’re charged when shopping online, algorithms have become an inescapable but often invisible part of our lives. We hope you’ll try out this card game in your classroom or community group to help young people understand how algorithms shape their lives – and what they can do to take control.

Find out how to order free sets of the card game here.

#ForYou: A Game About Algorithms was made possible by a financial contribution from the Office of the Privacy Commissioner of Canada.