Skip to main content
Submitted by Lynn Jatania on 18 Feb 2020.

One of the hardest things to do as a parent is let go.

At some point, you have to start loosening up the rules, and stop policing their every move. You have to let them decide what to wear based on the weather, even if that means going off to school with no hat, gloves or boots when it’s -10°C outside. You have to let them build up laundry until they have an underwear crisis. You have to trust that they will know whether or not they need to pee before leaving the house, and let them make the call.

It’s part of helping them learn to be an actual, autonomous adult.

Our two older kids are now in Grade 11 and Grade 10. They could both be living away from us, at university or college, within a couple of years. So as much as I want to protect them and keep them safe, my husband and I are trying really hard to give them the gift of trying, failing, and figuring out boundaries on their own, while we are still here to pick up the pieces if need be. 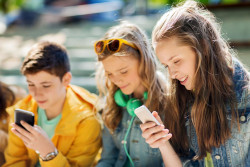 When I was in university, I lived with a girl who never had a television growing up. Her parents no doubt felt they were keeping her brain fresh and creative and stopping her from becoming a “mindless content consumer.” But when she got to university – a place with a TV in the student pub, in our apartment living room and in the study room our class used – she had no framework of her own to limit her exposure. She was transfixed, and would lose hours in front of the screen. No matter what was on, she was interested and distracted. She’d never learned how to make television a reasonable part of her life, and not her whole life.

I’m afraid of something similar happening to my older two. If it’s always me saying: you can’t watch that YouTube channel, you can’t play for longer than an hour at a time, you can’t answer any messages from strangers – then what happens when they are living on their own, still teenagers, and with no past experience finding out what makes them comfortable and how they want to live their online lives? When they’re trying to figure all that out while also trying to study for and pass difficult courses, with no one to offer advice or sympathy? Who will be their police then, and what kind of framework will they have to manage their own lives?

We’ve decided that now is the time to start a gentle transition to internet autonomy for our older teens. We’ll talk about how to identify spam email, but then let them deal with their own inbox. We’ll ask them how long they plan to play video games, and how they will know when time is up, but then leave them to execute the schedule on their own. We expect them to do their chores and homework before having a little social media time, but we now want them to make their own call – if they feel they’ve done their jobs around the house, they can have social media time without asking first.

I expect this will be a painful transition for both of us, but it’s important to let go a little at a time, instead of all at once. When do you think you’ll loosen the internet rules for your kids?