Skip to main content
Submitted by Matthew Johnson on 14 Feb 2008. 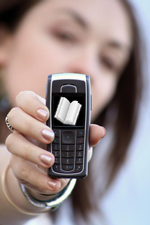 In Japan, cell phones and texting are much more widespread among young people than they are here. Much of what we do on computers is done through phones there, with the result that those students that own cell phones spend an average of two hours a day on them. Japanese TV dramas even feature scenes where the dialogue is entirely done through texting, with characters thumb-typing furiously while the messages appear as subtitles. Now another part of life has been squeezed onto the one-inch screen, resulting in the creation of the cell phone novel.

The typical cell phone novel is written by, as well as for, young women: the website Maho no i-land, which ‘publishes’ many of the books, says that most of the authors are women in their early twenties, while users are largely between fifteen and twenty-five. Unusually for Japanese fiction the text is written horizontally, rather than vertically, to make it easier to read on the small screen, and the novels arrive in bite-size instalments that add up to a total of 200 to 500 screen-pages. Authors are not typically paid, but submit their work in hopes that it will eventually be published on paper: one book, “If You,” became the number five bestseller of 2007.

Unsurprisingly, this boom in handheld reading has drawn some criticism. There is little effort in most of the novels to develop character or create evocative imagery; instead the reading experience mimics that of texting, focusing on dialogue that is written in short phrases and even emoticons. Lovers of modern Japanese literature, which has tended to be heavy on emotionally charged and evocative imagery, have disparaged the cell phone novels as being more akin to comic books than literature. The Japanese literary journal Bungaku-kai even ran a cover story entitled “Will cellphone novels kill ‘the author’?”

Many cell phone novel authors, as well as their publishers, argue that the form is not drawing away readers from traditional novels but rather appealing to non-readers. A cell phone novelist who goes by the byline ‘Rin’ told The New York Times that her generation was uninterested in traditional novels: “They don’t read works by professional writers because their sentences are too difficult to understand, their expressions are intentionally wordy, and the stories are not familiar to them.”

Even literary critics have been open to considering the novels: Mikio Funayama, a spokesman for the journal Bungaku-ri, said that “Although cell phone novels were initially snubbed by traditional writers, they reflect our time. They could develop into a new literary genre so we must keep our minds open.”

Will cell phone novels cross the Pacific? It’s hard to say. Besides the higher rate of cell phone use, people in Japan are much more likely to use public transit, where they’re free to read, as opposed to driving in private cars. The Japanese language, as well – with its compact, meaning-loaded characters and multiple means of writing the same word – is well-suited to the small screen.

It seems fitting that this new form of the novel should originate in the country that gave the world its first, Murasaki Shikibu’s The Tale of Genji. There are, in fact, a number of surprising similarities between cell phone novels and their more illustrious ancestor: as well as their shared emphasis on affairs of the heart, both were originally written and distributed as serials, one chapter at a time.