Skip to main content
Submitted by MediaSmarts on 25 Sep 2013.

Last summer while doing some writing for an educational publisher on communication skills, I struggled significantly to get my thinking around the way I was to approach the project. I have to admit I felt baffled, and it reminded me of my experience in Grade 12 Functions. The writing task required a focus on a particular communication skill that students need and I was to embed various forms of text around the skill. For example, if the skill was how to communicate in groups, I would then work in various forms of texts that require group communication. I understood the skills, I kept writing the lessons to help students understand aspects of the form, then quickly realized I was losing focus on the skill required.  After several frustrating sessions at my computer screen, one of the eight key concepts of media (John Pungente) slapped me across the face and I finally understood why I had been so perplexed.

I had been trying to write the content to fit the form. Even after fifteen years of teaching high school Media Studies and the eight key concepts, the implications of them continue to grow in my consciousness; I keep learning the value of these deceptively simple concepts. But I also know that teaching the concepts can be difficult. (Note:  MediaSmarts draws on a modified list of five key concepts of media literacy to underpin their media literacy materials. This concept falls under Key Concept Five, “each medium has a unique aesthetic form.”)

In the past, I’ve used this simple activity with my media students– and it works– but it is limited because of the revolution taking place in communication. 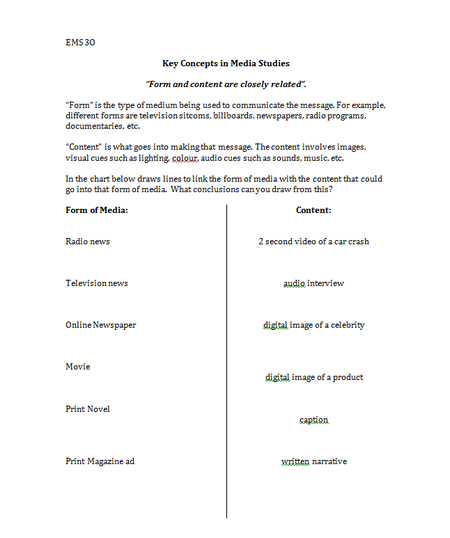 Even though communication modes are changing,  it is not always technology that is prompting this change. Take Chris Ware’s new graphic novel, Building Stories. The form is print but the author changes the conventions of the form merging them with those of comic books, game boards, jigsaw puzzles and memory chests.  I read an interesting article, “The Conscious Materiality of Chris Ware’s Building Stories” by Shawn Huston which can be found here: http://www.popmatters.com/column/166841-the-conscious-materiality-of-chris-wares-building-stories/ and watch this unboxing of the book video.

Changing technology plays no role in Chris Ware’s innovative form. Instead, he merges the conventions of many forms. I think there is a convergence revolution taking place.

Even with this revolution in communication, the validity of this key concept still holds true - form and content are still closely related because Ware was restricted to the print medium. He took the conventions of multiple print forms to communicate his narrative.

Another example that demonstrates this key concept can be found in Rives’ TED talk, “A story of mixed emoticons.”

Although I did struggle in writing a communication skills textbook for students, what I came to realize is that they need to understand how to read the conventions of form in order to recognize how content is shaped. This is not unlike the traditional methods of identifying similes or metaphors so students can appreciate reading them and effectively communicate using them. However, converging forms complicates this reading and writing process for both the student and the teacher. I think that teaching the traditional skills of reading and writing still applies but recognizing how conventions break out of the controls of genre will help students acquire the skills needed in the revolution of communication.

To help practically with this complex problem I have tried to identify where students are having difficulty and simplify some of the larger issues of reading media. My students were struggling with understanding the notion of media forms so I decided to create this matrix. Most forms of communication will have one value from the top row and one value from the bottom row giving them four possible forms. 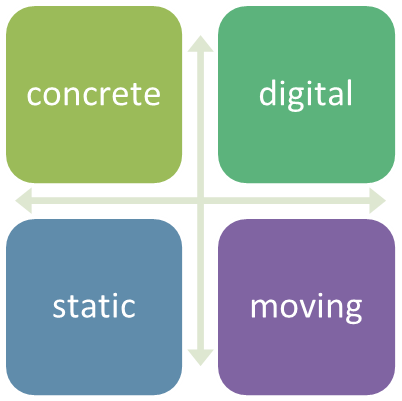 I then ask students to make lists of specific media forms and they can see where they fit on the matrix. For example, a newspaper is static and sometimes concrete, sometimes digital. Conventions of particular forms are easier to identify when they are grouped in the same general media form.

Contemporary communication means that the boundaries of genre once controlled by conventions are being smashed as advertising enters journalism and live voices are replaced by texts or tweets. I believe these changes have made the key concepts more relevant and more important to understanding communication in the revolution of convergence. More than ever students need to understand the modes of communication and then obtain the necessary skills to do so in the convergence revolution.

iSkills is a new English Language Arts series from McGraw-Hill Ryerson for grades 9 and 10 students. The series consists of three student resources with each title focusing on a specific area of English Language Arts skills: comprehension, communication and language conventions. Each skill is presented through a three-part lesson and includes anecdotes from people in the workplace using the skill, modeled texts and many opportunities for students to apply what they have learned.

A complicated analysis presented in a very enlightening way. Bravo to the writer!