Skip to main content
Submitted by Matthew Johnson on 15 Jan 2009.

As media outlets continue to close and advertising budgets shrink, the once-mighty Super Bowl is receiving much less buzz than usual. A number of major advertisers, such as Federal Express and troubled automaker General Motors, have decided not to run Super Bowl ads at all this year. Another January event, though, is attracting a surprising amount of media attention: the U.S. presidential inauguration. 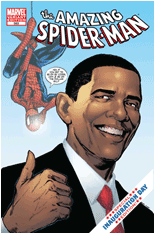 For many years the inauguration, while always a hot ticket for the political set, did not earn much in the way of TV ratings – certainly not in comparison to the Super Bowl. This year, though, the event will be covered by many different outlets, including some surprising ones. CNN and Facebook will combine to Webcast the inauguration, allowing Internet surfers to watch the event at work; the two companies will link their sites so that comments made on CNN.com will instantly appear as Facebook status updates. Meanwhile, MTV will be according as much time to the inauguration as it usually does to its award shows, and BET – not generally a source of political news – has a full week of coverage planned. Even the national comic book of record, The Amazing Spider-Man, will feature coverage of the inauguration in its January issue, including the attempt of the villainous Chameleon to foil the event by impersonating the President-elect. (Though Presidents have made any number of comic-book cameos over the years, this is one of the few lead appearances, echoing a 1962 issue of Superman in which the Man of Steel reveals his secret identity to John F. Kennedy.)

As remarkable as all this may seem, the fact is that inaugurations were once one of the most important media events; indeed, if their history is traced far enough back they may well be the first media event. As late as 1960 the entire population of the United States was expected to watch or read about the inauguration; to this day, a myth persists that Kennedy ended the fashion for hats by going bare-headed at his inauguration. The truth is just the opposite: Kennedy actually wore a top hat, an item already long out of fashion but part of the traditional “show” (Nixon was the last to wear one.) The scholar of myth Joseph Campbell pointed out that the consciously out-of-date clothing once worn by Presidents served to highlight the special and even ritual quality of the event; Kennedy took this one step further by wearing not just the traditional top hat but the taller stovepipe hat, forever associated with Abraham Lincoln, in an attempt to link himself with that President who had been inaugurated a hundred year earlier.

The inauguration is itself heir to a much older tradition, the coronation. Contrary to popular belief, in most monarchical countries the coronation is not when the new monarch takes office but instead is strictly ceremonial, a recognition of the new ruler rather than the beginning of his reign. The coronation is a media event because its purpose is to send a message through symbolism; exactly what message that is varies over time and place. In ancient civilizations it typically involved showing divine sanction of the ruler, or in cases such as Ancient Egypt showing that the ruler was himself divine. Most often, what the coronation signifies is a legitimacy and continuity of rule: for instance, the outgoing President and President-Elect traditionally ride together to the inauguration.

A textbook example of the inauguration as media event is the coronations of the monarchs of the United Kingdom. These changed dramatically in the middle of the Nineteenth Century due to two factors: first, the rise of the mass media as cheap newspapers became commonplace, and second the class upheavals that seized England and Europe in the first half of the century, culminating in the revolts of 1848. Together these changed the ceremony from one to which only a small number of notables were invited to an event intended to be consumed, if not directly witnessed, by the entire nation.

Breathless accounts were published in the newspapers of the day, and a host of “ancient” traditions were revived or simply invented, swelling a fairly no-nonsense affair to an event of Oscar-like proportions. The quite conscious intent was to create a spectacle that would inspire affection for the monarchy, while at the same time underlying the continuity of rule it represented. The effort was a success, both for the monarch and the ritual, and the coronation became such a beloved tradition that when Elizabeth II’s was televised it received the largest-ever audience to that date, and is credited with sparking British television sales.

The question, then, is not necessarily why this inauguration is a media event but why more recent ones have not been. A number of factors were likely at work: the increasing suspicion of the establishment through the 1960s (Nixon’s inaugural of 1973 was accompanied by a “counter-inauguration” in protest); a lessening of interest in tradition in favour of the new during the same period; disillusionment and disenchantment with the political process, following the assassination of Kennedy and the troubled presidencies of Johnson and Nixon (particularly their involvement in the Vietnam War); a fashion for the casual over the formal, culminating in Carter’s abandonment of the traditional morning-dress attire at his inaugural in 1978; and of course the loss of respect for the office of the President, due largely to Nixon’s near-impeachment and resignation.

Why, then, has the inauguration once again become a major media event, after a lapse of nearly fifty years? The obvious answer is that Obama is not just another President; as the first African-American President his election and inauguration are genuinely historic. There are other reasons, though, why he is such an attractive figure to media. One is that he is the first new-media President: text messages and social networking were key to his fund-raising, and to the phenomenal loyalty he inspired in his organizers. (Many have written about the thrill of getting a text message from “Barack,” though they knew it was hardly a personal message.)

Reagan personified the President as a construction of the traditional media – a single message, honed and polished to appeal to the most people, and broadcast as widely as possible – while Obama has some of the quality of interactive media. Like Facebook or Wikipedia, Obama’s image is something of a collaborative effort. His most iconic poster, whose only text read Change, allowed viewers to fill in the details about just what kind of change he was promising, and in general people have been more than willing to project on him whatever qualities they most want to see. Many online voices, for instance, have been more excited about his being “the first geek President” than the first African-American President, seizing on his affection for his Blackberry to show that he is a member of that group. The reclaimed term “geek” is used affectionately to describe Obama, as opposed to Stephen Harper who is described with the still-pejorative “nerd” due to his fondness for “Star Trek” and tendency to appear in embarrassing cowboy costumes. It was an offhand comment by Obama saying that he had read Spider-Man as a child that led to him being declared “Fanboy-in-Chief” and making his comic-book appearance. In the end, it may be less Obama’s specific identity than his universality that makes him the first Presidential celebrity of the Internet age.

UPDATE: Visit http://www.metafilter.com/78406/Presidential-Inauguration-Videos for links to videos of past inaugurations. (Note: some videos may not have been uploaded by the copyright holders.)