Skip to main content
Submitted by Matthew Johnson on 25 Sep 2008. 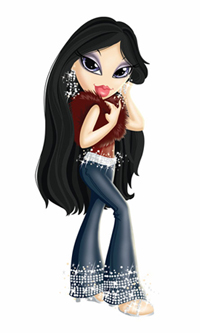 It’s been a rough couple of months for a brat. Or rather for Bratz – the giant-headed, almond-eyed, scantily dressed dolls that have been giving Barbie a scare for the last few years. One of the toy success stories of the last decade, the Bratz juggernaut now shows signs of slowing down: first, a $100 million judgment against the dolls’ manufacturer, MGA Entertainment, which ruled that the original designer first drew them while still under contract at Mattel; then a successful campaign by parents to keep Bratz books out of the Scholastic catalogue, which places books in thousands of schools across North America; and, most painfully, reports that stores have cut shelf space for Bratz by as much as 50 per cent.

Parents and other concerned observers should probably wait before celebrating, though. None of these events necessarily mean that the end is near for Bratz, nor for other dolls that promote a distorted image of women’s bodies and sexuality. The loss of shelf space is most likely nothing more than the waning of a fad, and Scholastic insists that the parent campaign had no influence on their decision to remove Bratz books from their catalogue. More importantly, the attitudes towards body image and sexuality which Bratz dolls represent aren’t going to disappear anytime soon.

Barbie, of course, has long been criticized for her unrealistic measurements, and it may have been surprising to some to be looking back wistfully to the time when she ruled the doll aisle. The 2007 American Psychiatric Association Task Force on the Sexualization of Girls Report (APA Report) singled out both Bratz dolls and cartoons as particularly bad examples, noting that “Bratz dolls come dressed in sexualized clothing such as miniskirts, fishnet stockings, and feather boas. Although these dolls may present no more sexualization of girls or women than is seen in MTV videos, it is worrisome when dolls designed specifically for 4- to 8-year-olds are associated with an objectified adult sexuality.” At the same time, Bratz were only one of many examples of images of adult sexuality in young girls. An analysis of magazines such as Newsweek and Ladies Home Journal found 38 ads that were seen to portray children “in sexual ways,” and only a campaign by parents (similar to the one which had no effect on Scholastic’s decision not to include Bratz books in their catalogue) prevented the release of dolls based on the Pussycat Dolls pop group.

The APA Report suggests that “The objectified sexuality presented by these dolls, as opposed to the healthy sexuality that develops as a normal part of adolescence, is limiting for adolescent girls.” Evidence for this may be the proliferation of revealing and provocative MySpace and Facebook profiles, in which adolescent girls are taught to trade sexuality for attention. A sixteen-year-old interviewed in an article for the New Haven Advocate put it succinctly: “I don’t think it’s about sex or anything like that. MySpace is like this place where you can accept friends and be friends with everyone. The girls with those [revealing] pictures, they have so many friends and most of them are people [they’re] never going to meet.”

There’s reason to hope that a backlash against preteen sexuality has begun, with books such as Packaging Girlhood critiquing the ways in which various media conspire to sell a particular image of femininity to girls. Another good example is the NFB film Sexy, Inc, which examines these issues and, like Packaging Girlhood, suggests strategies for countering the sexualizing influence of these images on boys and girls. In some countries, such as Australia, advertising codes have been revised to specifically ban sexualized images of children.

The fact, though, is that using teen sexuality to sell products will most likely continue to remain popular. Bratz dolls, with their heavy makeup and streetwalker fashions, are just another way of playing make-believe, of letting girls pretend to be older, just as little girls once played “house” and Barbie and Ken were sent on dream dates. As Deborah Tolman, one of the authors of the APA Report says, “Nine-year-old girls do not experience dressing up in a sexy way as a sexy thing. They’re just wearing clothes and thinking it’s cool to look older.” Preteens naturally want to pretend to be older, and if the image of adolescence and adulthood they get from the media is an exclusively sexual one, that’s what they’ll embrace.

MediaSmarts resources on sexualisation of girls

Sex and Relationships in the Media