Skip to main content
Submitted by MediaSmarts on 22 Sep 2011.

I was recently asked by Jane Tallim to write a guest blog and seriously wondered what suggestions I could offer that would appeal to high school English and Media Studies teachers. We all know that teaching media is like trying to hit a moving target, and education lags behind revolutionary changes in new media forms. However, over the past decade of teaching both Media Studies and high school English, I have spent much time considering the intersection of new media forms with traditional English forms and have tried to build a bridge of understanding across time for my students regardless of the target. By focusing on the skills of deconstruction and construction, I believe the form of the text, or the new medium, becomes less relevant to comprehension.

Reading as Deconstruction, Writing as Construction:

After thirteen years of teaching, I realized that the skills for critical analysis of media texts are quite similar to those required for analysis of traditional literary texts – in fact, all texts are forms of media, including Shakespearean plays. Although the language of Media Studies differs from literary analysis, the approach is essentially the same; take apart or “deconstruct” each form in order to understand how it is constructed and how it utilizes various devices to communicate. Each part of a text form can be compared to another text form, so I showed my students how both modern and traditional forms of communication use many of the same devices. With inspiration from Robert Marzano’s work on integrating technology into the classroom through instructional practice, I helped my students, who already understand intuitively how to read and deconstruct a film and compare its symbolism with the symbolism of Shakespeare’s plays. I changed my language in both the English and the Media Studies classroom to suit both disciplines; when showing a film, I told them that they were not “watching”, but “reading or deconstructing”. For example, when considering the imagery of Romeo and Juliet, I showed them how Baz Luhrmann “writes or constructs” a scene in the film using fire as a concrete symbol to abstractly represent the idea of unbridled passion and hatred; students then compared an auditory symbol to a visual symbol.

Similarly, I spoke to my students about the intersection of reading and writing and deconstruction and construction – and how one is the inverse of the other. They began to appreciate this connection, and the ways in which understanding the form of a text provided them with the ability to write in whatever form they chose. By understanding how documentary is constructed (or written) and communicates, they were able to construct (or write) their own documentaries, and they better appreciated the methods of persuasion both verbally and visually. By understanding how Shakespeare uses imagery and symbolism in a drama, they were able to construct Twitter posts using vivid imagery and symbolism; they deconstructed Shakespeare’s imagery, and then constructed their own.

Practices in Building the Bridge:

To build that bridge of understanding across time, I experimented with a new media form. I wanted to bridge the world of Shakespeare’s Romeo and Juliet with the world of Twitter, and I called this assignment “Such Tweet Sorrow”, a name which I borrowed from a Twitter project by an acting troupe in the UK. Initially, my students groaned and complained about the “meaninglessness” of Twitter, the pitiful celebrity worship, and the egotism of those who post trivia from their own lives. However, this perspective changed once they had a chance to construct or write with this new media form.

For this assignment, students formed groups of six, each assuming the role of a pivotal character in Romeo and Juliet while we read the play aloud in class. They created Twitter accounts in character, personalized them, followed one another, and at the end of each day, they wrote and posted Tweets. In 140 characters, they had to reveal events of the plot and mood, demonstrate knowledge of character, and use imagery to help communicate meaning. 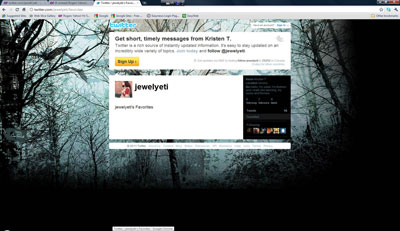 At the end of the play, they wrote reflections on the assignment; this metacognitive strategy proved to be very revealing. My students expressed difficulty in writing concisely with a limited number of characters, and described strategies for brainstorming to generate interesting and relevant ideas, strategies for drafting potential posts, and using an online dictionary or thesaurus to help them reduce the number of characters required, as well as strategies for editing each post. They learned from the posts of other classmates whom they “followed”, they were surprised by the amount of time and effort required to post something meaningful, and they realized that even Twitter posts can be poetic. At the end of the assignment, their views of Twitter were more moderated, recognizing strengths and weaknesses in this new media form and how it can be used by various groups and individuals.

Using a new media form my students learned how to be precise and concise. I realized in this one venture into the use of new media forms that my students employed all steps of the writing process authentically without prescriptive direction, and they demonstrated reading comprehension (deconstruction), creative writing (construction), critical thinking, and reflection (metacognition) on this new media form that occupies space in popular culture. Twitter provided the bridge to understanding a traditional form, but also engaged my students in the modern world allowing them to think critically about communication, and this new media form; their views on both Shakespeare and Twitter were broadened and deepened. Through deconstructing a Shakespearean play, and constructing in a new media form, students linked the past with the present while critically thinking about the revolution of text forms in their own world.

Melanie White is an English and Media Studies teacher at Longfields Davidson Heights High School in the Ottawa-Carleton District School Board. She has worked as an Educational Advisor for McGraw-Hill Ryerson Ltd on Remix:A Revolution of Text, a new textbook for Senior High School English classes. As part of the iLit series, this textbook of previously unpublished works focuses on the new forms of communication and recognizes that reading and writing has been undergoing a revolution. This text acknowledges the authentic modes of communication used by teens and youth culture recognizing social media and a variety of graphic texts. Questions focus on reading for meaning, critical thinking, metacognition, and student voice.