Skip to main content
Submitted by Andrea Tomkins on 27 Jan 2014.

I had a really interesting conversation with my 14-year-old daughter recently. She was wondering why so many adults assume that teenagers are all the same: a bunch of lazy, self-involved jokers who are glued to their devices all day. I didn’t have an answer for her, really, only that people tend to generalize, and that this is Never a Good Thing, no matter who it is we’re talking about.

I think it’s easy, as a parent, to fear new technologies. We’ve all heard the horror stories on the evening news: the digital photo that falls into the wrong hands, the bullying that ends badly, the harassment, the YouTube videos that haunt kids for years (I’m thinking specifically of Star Wars kid here). I hear the stories too, but I deal with them by teaching myself about the technology and educating my kids about the pros and the cons.

I think most of us probably have a handle on what our kids are doing online, but what’s going on elsewhere, in other families? And what does the future of technology use look like?

In 2013, MediaSmarts conducted a national survey of 5,436 Canadian students in Grades 4 through 11 to explore the role of networked technologies in their lives. The resulting report, released this week, is called Life Online, it’s a “state of the nation” kind of report concerning our kids and the technology they’re using. MediaSmarts let me have a sneak peek at the report and I wanted to share a few parts that I found interesting, and might even affect the way we handle these kind of technologies (Facebook et al.) in the coming years at our house.

First of all, surprise!  Internet access is universal, with 99% of students able to access the Internet outside of school. I knew Internet was everywhere, but not to this degree. Did you? Cell phones and smart phones are among the primary devices students use to go online. Close to half (49%) of students in Grade 4 have access to their own phone or someone else’s phone on a regular basis. So if your fourth grader tells you half the kids in her class have a mobile phone, they’re not far from the truth.

This is the kind of high-tech device we had at our house when I was at that age: 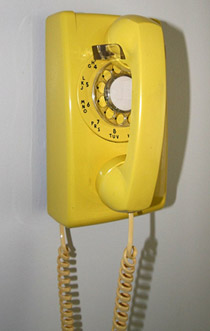 Although young Canadians are turning to the Internet as a primary source of information – from sports and news to more sensitive topics such as mental and physical health – our children’s online life has become increasingly social, with social networking now an integral component of many online activities.

I don’t have anything against socializing - I think it’s an important part of being a kid - but it makes me wonder if I need to be better at advocating use of “smarter” resources online. Whether that’s showing my kids the importance of following the news and researching current events, advocating for a cause, or sharing creative projects, it’d be good to show them the potential of the tools that are in front of them.

According to the report, online media are primarily used for entertainment and communicating with friends and family. The most frequent online activities reported by students were:

Ok. I don’t know what I was expecting, but this makes me a tiny bit sad because I can’t help but visualize a generation of brains rotting away into pulpy mush. Maybe I’m just old, but what is somewhat encouraging is that 49 percent of students use the Internet to follow news and current events, and that this number climbs from 28 percent in Grade 4 to 65 percent in Grade 11. (Mind you, knowing that kids, like adults, can’t resist celebrity gossip, 43 percent also admitted to going online to catch up on entertainment news and celebrities as well.)

Online safety is one of the things we’ve been talking about here at home as soon as our children’s fingers hit the keyboard (ok, even before that). So why does it bother me that high percentages of boys (90%) and girls (89%) agree with the statement that “I know how to protect myself online”? Are we parents THAT good at laying down the rules, or are these kids just really confident?  Interestingly, the report also concluded that girls are more likely than boys to have household rules in place regarding online activities. I think that’s more of a comment on parenting girls versus parenting boys.

And finally, there’s a section in the report about unplugging. This is something I think about often. Thirty-nine percent of students sleep with their cell phone in case they get calls or messages in the night. One-fifth of Grade 4 students also report sleeping with their phones, and this habit peaks at just over half of students by Grade 11. Oh man. In our family we’ve made a point about getting the kids off their devices by 9:00 p.m. I’ve read too many articles about the spectrum of light they emit and how it disrupts sleep (and we all know that a tired kid is a cranky kid)!

But here’s the best news of all. According the report, ninety-four percent of students choose to go offline to do other things like spending more time with friends or family, enjoying some quiet time by themselves or going outside. I think that’s definitely something worth celebrating, don’t you? You can read the full report here.

As someone who retired from teaching a year ago, none of this is surprising to me. But let’s face it, before the internet, your average kid was not reading the encyclopedia except when they had to do a project. Schools increasingly use the internet as a tool but it would be great if there were more readily accessed resources that we could direct kids to. My biggest issue with online research is that it is condensed into small bits or summaries and that students aren’t required to do much thinking or reading. It’s hard to get beyond a superficial treatment of a topic and kids don’t realize there is often a lot more to something. As for the social aspect of the web-well, they’re kids-all of that comes naturally.

Your point “it’d be good to show them the potential of the tools that are in front of them” resonates. I couldn’t agree more, and wish that our education system would wake up to that fact. In the bullet point list of what kids do online, it is very discouraging that learning/studying/researching do not appear on that list. I think this is a problem with an education system that works very hard to keep the internet out of school & marginalize its educational potential, through misguided policies, inadequate network infrastrucutre & technology, outdated attitudes about teaching & learning practice, and poor support for teachers who want to use technology. The message my kids bring home about the internet is not that it is the greatest educational resource ever created by mankind, but that it is the place where people go to goof off and be mean to each other. It is a dangerous place, not a place where you go to learn. So it is no surprise to see that, for most kids, the web is nothing more that a hangout space where they can plug into celebrity culture because no one is showing them how to do anything else with it.