Skip to main content
Submitted by Matthew Johnson on 11 Jun 2010.

Which of these girls looks older? 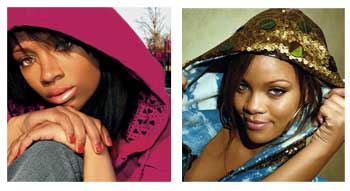 How about these two? 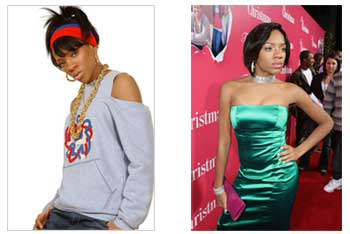 What about these two? 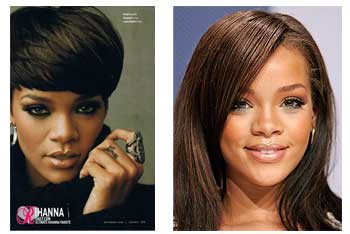 These photos are actually the same two girls, albeit styled to give very distinct impressions. The top row shows Niatia Kirkland (AKA Lil Mama) on the left and Robyn Fenty (AKA Rihanna) on the right. With both dressed in a partially pulled-down hoodie, neither looks much older than the other.

The middle row photos are both of Lil Mama and the bottom row are both of Rihanna. In the middle row, we see Lil Mama in two very different guises. On the left her clothes and pose play up an urban, youthful image: her body is turned away from us but her eyes defiantly stare directly at the viewer, she wears unsubtle, chunky gold jewelry, affects a “don’t care” hairstyle by putting up her hair in a messy ponytail with a sweatband, and shows off a b-girl look with her DIY shoulderless sweater. This photo delivers a very different message from the one on the right, where her apparel and body language have been crafted to emphasise maturity. In this shot Lil Mama’s shoulders are square with our gaze but her eyes are looking elsewhere, projecting a disinterested, adult confidence. She thrusts one hip out, drawing attention to her silhouette which was previously hidden under her baggy “b-girl” outfit. She’s traded her flashy bling for an understated but much more opulent diamond choker and bracelet – providing in the two shots both youthful and adult variations on the theme of conspicuous consumption. Lastly, her hairstyle is cut short and noticeably coiffed compared to the more youthful pose. With just a change of wardrobe and attitude she appears to gain ten years.

In the last pair of photos, Rihanna undergoes the same treatments to come off as a girl and a woman. In this case the major cues are facial expressions, additionally enhanced by attire. On the left, she inclines her head just a tiny bit, beckoning the viewer closer. Her eyes are narrowed a little to make her gaze smolder, accented by the heavy use of black eye-liner. To appeal to our sense of touch, she curls her fingers gingerly around a turtleneck sweater, simultaneously brushing her cheek with her fingers and her chin with the collar. Her lips are held in a purposefully ambiguous not-smile, not-frown, which invites the viewer to project their own reading onto the expression. To top it off, she wears her hair very short to emphasize the delicate, almond shape of her face. Compare this to the more girlish portrait at right, where she sports a sunny smile and looks square into the camera with eyes wide open. She’s still styled to be pretty here, but in a much less seductive way. This shot is more similar to a yearbook portrait than a professional photo shoot.

Although images are not a language per se, they do follow rules to reliably produce a particular impression. When considering the role of each sign in an image, there are no hard and fast rules that specific signs always mean the same thing. The French scholar Roland Barthes famously described the flexible nature of connotations of signs in images, with changes in meaning dependant on their position in relation to all the other signs in an image. In the examples above, Lil Mama deploys a bit of androgyny with her b-girl clothes to look more tomboyish and emphasize her youthfulness, while Rihanna’s androgynous hairstyle is an integral part of her grown-up look. The connotations of androgyny change depending on the other signs that go with it in these images, to the point where androgyny is actually being used to play up femininity.

People who make their living producing images, such as photographers, stylists, publicists, directors and pop idols, learn how to use those signs to convey the impression they want to make. Although teen girls who are trying to send a signal to their circle of friends and pop music producers who are trying to send a signal to an audience of millions are working on different scales, the principle is very much the same. Depending on your audience, you need to tailor the signals you send out very carefully. Even your age can have a certain amount of wiggle room when dressed in the right signs.

No one walks around with their age stamped clearly on their body, but it is usually possible to guess how old someone is by paying attention to the signs they use. In the still photographs above, the producer of each image is making a statement about whether the person you are looking at is a ‘girl’ or a ‘woman’ by using clothes, jewelry, facial expression and body language. For the sake of a fairer comparison, what if we look at a music video for each artist that has been released in the same year? Both videos were chart toppers, both were included in Rolling Stone’s top 100 songs of 2007, and both were nominated for awards (“Lip Gloss” won MTV’s monster single of the year, while “Umbrella” won the Grammy for best rap/sung collaboration) so their level of impact is comparable. More importantly, since they both appeared in the same year, differences in the signals they send aren’t due to differences in changing tastes and fashion. As far as what was ‘in’ at the time, both record companies had access to the same palate to dress up the star of each video. Despite that, the end results are purposefully pretty distinct.

Although Rihanna only looks older relative to Lil Mama, she is definitely more precocious and seductive in this video. The amount of skin she shows off is only a small part of that image; to maximize the effect, every other aspect has to follow in lockstep with that idea. The dance routine Rihanna performs in the middle with her umbrella is a good example. The ginger, dainty steps and slow dips and rises are more in the spirit of burlesque than R n’ B. Similarly, the monochrome palate of the entire video draws attention away from colour to allow the audience to linger more on the tactile, textural aspect of the footage. The glossy pleather, rainslicked surfaces, and even close-ups on Rihanna’s skin painted silver are all meant to appeal to the sense of touch and fit a more sexed up image.

Contrast that impression to the one Lil Mama chooses for the Lip Gloss video. The exposition with her own mother at the opening sets her up as a high-school student and daughter, but this is just the tip of the iceberg. The clothes she wears are not particularly feminine (jeans, sweat socks, sweaters) and not at all ‘mature’; they emphasize an unpretentious, youthful look. This extends to the rest of the video, whose entire palate brims with electric, primary colours. There is no subtlety of flavour, just the visual equivalent of eating a fistful of candy. Certain stock characters which appear in the background like the nerd and the principal are played up to a cartoonish effect; a parody of high-school life but which emphasize the kid setting and tone nonetheless.

Interestingly enough, when these videos were made, Rihanna was only a year older than Lil Mama, yet because each video tugs the performer so hard in one direction, the margin appears much wider. Lil Mama’s youthfulness is keyed up while Rihanna’s precociousness is amplified. That difference between ‘girl’ and ‘woman’ is only one tip of a multi-pronged image the producers have crafted to attract their target audiences. What kind of audience do you think the producers for each performer want to reach via these images? The album titles work as a pretty concise statement.

Whether a performer projects a younger or older persona is not necessarily fixed, of course. Former Disney princess Miley Cyrus recently transition from a squeaky clean pop starlet image to a much more precocious, mature persona. The Atlantic commented on how Cyrus, made famous by her kid-friendly alter-ego Hannah-Montana, is ferociously breaking from her former image to establish herself as a less tame, more adult artist. To that end the producers of her “Can’t Be Tamed” video have carefully borrowed from and alluded to the styles and sounds of previous starlets who have made the transition, notably Christina Aguilera and Britney Spears. As mentioned in an earlier MNet post, musical taste is deeply enmeshed with identity, particularly for young people. From a marketing perspective, this observation echoes the fact that consumers establish brand loyalties very early in life, making the youth audience a valuable target group for developing lifelong customers. The transformation from teen starlet to grown-up sex-bomb is driven by economics: performers need to enlarge their audience to reach adults and maintain the loyalty of the original, maturing fan base. Whereas in decades past Cyrus fans might have outgrown the starlet and graduated to a more adult performer (perhaps one supported by the same record label,) the reigning logic now is to maximize consumer loyalty to the star-as-brand and “adultify” her to keep up with the evolving taste of her original fans. This process has very little to do with the starlet’s actual age, but rather through carefully selected and manufactured signs which connote the change.

Deconstructing this sort of image after the fact is a fun exercise, but trying your own hand at production is even more interesting. Once you’ve been faced with the same kind of decisions producers make, you can appreciate just how carefully crafted images are. With so much money at stake, producers have very little room for error, so each and every detail counts. The US-based Media Education Lab has designed just such an activity for youth to create a virtual starlet and manage all the little aspects of her look, message, and music. From the splash screen, click the music studio button and then pop music producer. The same site also offers a variety of other games addressing commercial media aimed at girl consumers.

• Pop Star Producer gives students a great deal of freedom to combine different lyrics, clothes, and effects. Have students compare and contrast how the exact same sign (a hairstyle, a line of lyrics, etc) in two starlets can be used as part of different overall impressions. How does the connotation of that one sign change when presented alongside several others?

• After students have created their starlets, extend the exercise by having them explain which audience each starlet is meant to reach, referring both to individual signs and the combined, overall impression.

• An increasingly popular strategy for producers of culture is to make their products more resilient by having more than one fan base built-in. For a real challenge, assign students to create a starlet in Pop Star Producer who can simultaneously reach two different audiences (such as children and adults, or hip hop fans and techno fans). Get students to explain how their starlet strikes a balance between attracting two audiences without alienating either one.