Skip to main content
Submitted by Matthew Johnson on 03 Dec 2009. 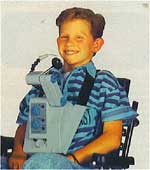 Let’s begin with that staple of teenage communication, the cell phone. While landlines have long had accessibility tools for people with hearing impairments, such as the Telecommunications Device for the Deaf or TDD (TTY in Canada), many cell phones are not compatible with these devices. (Voice Over Internet Protocol services have a similar problem.) At the same time, text messages – which are actually a more popular use for cell phones than voice calls among teens – can neither be sent nor read by people with impaired vision. Those who have any degree of motion-related disability in their hands, from arthritis to cerebral palsy, will find texting or even dialling the tiny buttons found on most cell phones impossible.

MP3 problems such as the iPod raise similar concerns. While it’s obviously not possible to adapt them to the fully deaf, many hearing-impaired people have better hearing in some registers than others. Most MP3 players, though, can only adjust the volume and not bass, treble or even balance between speakers, excluding many potential users with partial hearing. For those with impaired vision, meanwhile, these devices can be nearly impossible to use, with menus of small, non-adjustable text to navigate, most often using buttons that are nearly indistinguishable by touch. The iPod, with its scroll wheel, is particularly inaccessible when it comes to those with motion-related disabilities in their hands.

The virtual staircase: personal computers and the Internet

For many people with disabilities personal computers and the Internet have been a boon, as we’ll see below, offering opportunities to work and socialize in a context where ability is almost irrelevant. As the old command-line operating systems have given way to the graphical user interface of the Macintosh and Windows, and the text-based world of Usenet and BBSes have evolved into the graphics-based World Wide Web, for people with vision impairments and some motion-related disabilities they have actually become less accessible: a recent study of 1,000 Web sites found that 81% failed to reach a minimum standard of accessibility under the guidelines of the World Wide Web Consortium’s Content Accessibility program. None of the sites surveyed reached the highest level of accessibility, and only eight reached the second-highest.

Peter Dworkin, commenting on David Pogue’s blog on the New York Times Web site, noted that computer programming was once a viable career for blind people; now “the whole concept of a graphical user interface (GUI) using a mouse to make gestures and icons to represent files presents an untenable solution for the blind by its very nature.” Similarly, for many people with motion impairments using a keyboard to type commands, though sometimes laborious, was easier than making the very specific movements necessary to control a mouse.

Screen reading software does exist for people with vision impairments, but it has many limitations. To begin with, in most programs and Web pages information is organized visually, so that a sighted person can tell immediately what is important and what is not; a screen reader has no way of doing so and must read every piece of text from the top of the screen to the bottom. As well, graphics are read simply as “graphic” unless programmers and designers have taken the time to add descriptive tags, and buttons are similarly often just labelled “button.”

Although the Web presents fewer barriers for people with hearing impairments, some do exist. The most significant is the general lack of captioning on online games and especially video; neither Hulu nor Netflix have standards for captioning or require content to be captioned (this is especially galling in cases like Hulu, where the same content would be captioned if viewed on TV.) However, this may be changing: YouTube, the Internet’s top video site, began captioning its videos in November of this year, using speech-to-text technology to automatically generate the subtitles.

Left on the sidelines: video games

Video games have become one of the most popular forms of recreation for both kids and adults, but they remain largely inaccessible to people with disabilities. The word video may suggest that it’s unlikely that visually impaired people will be able to play them, but this isn’t necessarily the case: Brice Mellen, a teenager who was blind from birth, became widely known for his skills in fighting games such as Mortal Kombat and Soulcalibur. Mellen relied heavily on audio cues to understand what was going on in the game, but not all games feature such cues, and few games are designed with any thought to how a person with a visual impairment might experience it.

For people with hearing impairments, the situation is reversed: many games use audio to communicate key information – dialogue with game characters, hints of what is going on nearby, or even instructions on how to complete game tasks. Unlike movies or television, not many games include closed captioning – Zork: Grand Inquisitor (1997) and Half-Life 2 (2004) are two of the very few examples.

Even a sensory disability that may have less of an impact in daily life, such as colour blindness, can significantly affect how someone experiences a video game. Colour is often very important in distinguishing things such as which side a character is on, whether a door can be opened or not, or even whether or not a particular item will cause instant death.

One reason that little attention has been paid to making video games accessible may be that they are perceived as being entertainment of little value. Recent research, however – most notably the Digital Youth Research Project – has shown that playing video games is an important part of kids’ lives, providing a common topic of conversation. Children and teens with disabilities, if unable to play video games, are left out of this part of youth culture. Moreover, people with disabilities report a variety of positive effects of playing video games such as stress relief, improved concentration and hand-eye co-ordination, learning of important skills and a sense of achievement. Some experts, such as psychiatrist Dr. Carl Arinoldo, suggest that video games may have greater positive effects for people with disabilities who suffer from depression because “with some forms of depression, a person may be very focused on something that clearly amounts to a misperception of reality. So the chance to distance themselves from the perceived negative situation and relax may allow them to think more clearly and consider the situation later in a more realistic manner.” It’s certainly clear that people with disabilities are keen to play those games that are accessible: a recent study shows that one in five players of “casual” games (games which require less time commitment, are generally played online, and usually are free or can be played for a nominal cost) has a disability of some sort. (For comparison, eighteen per cent of the population of the U.S., and 14% of Canadians, have a disability according to census data.)

In our next blog we’ll turn to solutions and look at some of the things that are being done to help people with disabilities use and access new media.