Skip to main content
Submitted by Matthew Johnson on 12 Sep 2008. 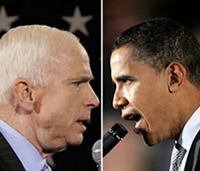 The Web is full of great online resources for teachers and students, with new material appearing every day. With the approach of the most-anticipated American election in recent history, social studies teachers can be excused for turning their eyes south of the border. Here’s a quick overview of recently created (or recently discovered) resources for social studies classes to help them and their students make the most of election season:

This Webquest assigns elementary and intermediate students to the Policy Research, Marketing or Public Awareness teams of one of the two candidates and gives each team a series of Web-based tasks to carry out. In each case the students focus in large part on how the candidate and his message are sold through advertising and the messages the campaigns try to get out to the media and create media products such as posters, podcasts and campaign commercials. The full project involves a series of short tasks and assignments spread over six weeks leading up to the election, though teachers can pick and choose how much they want to use.

With our own election looming here, it wouldn’t take much work for an enterprising teacher to create a Canadian version: keep the basic architecture of the assignment and change the content to Canadian politics and Web sites. (Adapting it to Canadian politics could also be a good assignment for a senior Civics or Social Studies class.) If anyone does take on this task, let us know and we’ll spread the word.

For older students, this tool allows users to search transcripts of the more than 100 political ads and videos posted to YouTube, including the CNN/YouTube Debates. With the increasing importance of the Internet to political campaigns, this tool is invaluable in letting students track down what each candidate actually said. As well, this Google Gadget lets you search by issue, to find out what position (or positions) a candidate has taken on a particular topic. If your school’s server won’t allow you to download Gadgets you can go to What Did The Candidates Say? and do a Web-based search instead.

This site allows students to get an overview of how often words are being used in six U.S. newspapers, something that’s sure to be more and more illuminating as the election goes on. As well as a simple list it provides a chart showing both how often clichés are appearing and which newspapers are using them most often, as well as a “cliché cloud” that represents the same data by the relative size of the words. Kill the Cliché is a “beta” version at the moment, and in some ways it shows: some of its promised functionality is still lacking, and its word choices show a poor understanding of which words are being overused because they’re topical and which are being overused simply because they’re prepositions or conjunctions (at the time of writing, for instance, the top cliché of the day is “amid”). Still, it’s a valuable way of getting students to look closely and critically at the news media.

This site archives U.S. election advertising from the current campaign all the way back to 1952, allowing teachers to show how marketing techniques have been applied to politics over the years – from the optimism of Reagan’s “Morning in America” to the fear-mongering of George H.W. Bush’s “Willie Horton” and Johnson’s famous “Daisy” ad, which implied that electing his opponent would bring on a nuclear apocalypse. The site also includes a Teachers’ Section with complete, downloadable lesson plans on topics such as “Understanding the Language of Political Ads,” “Children in Political Ads” and “Campaigning and the Internet.”