Skip to main content
Submitted by Matthew Johnson on 28 Mar 2008. 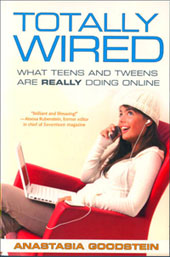 Two new media education resources crossed our desk recently: Totally Wired by Anastasia Goodstein and Children’s Learning in a Digital World, edited by Teena Willoughby and Eileen Wood. While they are extremely different, both are useful additions to any media education library.

Totally Wired is a book primarily aimed at parents and educators struggling to understand young people’s online lives. In this respect it’s much like the recent Frontline documentary Growing Up Online, to which author Anastasia Goodstein in fact contributed (you can read her response to the show here.) Totally Wired is written in a casual, accessible style and is devoted largely to calming adults’ fears about the online world: “The media has sensationalized the issue of online predators,” Goldstein says, “stoking the natural fears of parents and educators. While the idea of a child being abducted by a sexual predator he or she meets online is every parent’s worst nightmare, and a reason to be careful, the actual incidences of this happening are quite low.”

Throughout the book Goodstein draws parallels between young people’s online experiences and the social experiences of earlier generations – comparing social networking sites, for instance, to the round-robin telephone calls of her adolescence. At the same time, she notes differences where they are important: “What’s different about today’s totally wired teens is that the viral and public nature of these new technologies has magnified and publicized, though not changed, what it means to be a teen. Instead of gossiping with a friend and having it travel telephone-style through your school, that gossip can now travel through several schools and include mean pictures posted on a Web site.” As well, she notes, young people are no longer just passive consumers of mass media: “Teens are not only consuming all this media content: they are creating it.”

Despite her consistently positive attitude towards the online world, Goodstein does not shy away from discussing some of the risks of being online. She suggests that teens are engaging in risky behaviour online in part because their offline lives are so rigidly structured: “My parents forced me to get a job when I was fifteen,” she notes, “to cut down on the time I spent hanging out. But my generation was not nearly as scheduled as many of today’s teens, who seem to be busy most of the time either with sports practice, theater, SAT prep, or some other after-school activity. By staying constantly busy, teens are not only building their college applications but are also staying out of trouble. Makes sense, but a huge part of growing up and making choices tends to happen without adults around.”

Children’s Learning in a Digital World is a very different book; it is a collection of essays with an unabashedly scholarly tone, intended as a textbook for university courses. However, it too provides a useful overview of its subject, looking at topics such as How and What Do Videogames Teach?, Video Addiction: Fact or Fiction?, and Using Technology to Assist Children Learning to Read and Write.

One article that has common ground with Growing Up Online is Henry Jenkins’s Media Literacy – Who Needs It? Like Goodstein, Jenkins considers the issue that with online media young people are not just consumers, but also producers: “In this new media landscape, children are participants – not spectators, not even consumers in the traditional sense of the term. They are actively shaping media content – a process which offers them new opportunities for emotional growth and intellectual development but which also poses new kinds of ethical responsibilities.”

This is a timely book in that it addresses new challenges in integrating technology in education. As Jenkins puts it, “Education for the digital revolution has stressed tools above all else: the challenge was to wire the classroom and prepare kids for the demands of the new technologies. Little effort was made to give kids a context for thinking about these changes or to help them think about the new responsibilities and challenges they faced as participants in the digital culture.”

Other authors identify similar concerns with the state of technology in education: Julie Mueller, Eileen Wood, and Teena Willoughby, in Integration of Computer Technology, write “When educators had an opportunity to express their thoughts in an open environment (i.e., focus groups), two things became very salient. First, the integration of technology is an emotionally charged issue, and second, educators can clearly identify barriers and supports to computer integration.” This book is a valuable addition to that debate, taking a scientific approach to the question of how to best integrate technology and media into the classroom.

Growing Up Online and Children’s Learning in a Digital World are very different books, intended for different audiences, but each has something to contribute to just about any reader interested in the Internet and media studies. While Goodstein works hard to keep her book accessible, her focus on debunking myths about online life guarantees that even readers familiar with her subject will find something new. At the same time, while much of Children’s Learning… is too narrowly focused for the casual reader, articles like Jenkins’s, James Paul Gee’s “Good Videogames, the Human Mind, and Good Learning” and Yasmin B. Kafai and Michael T. Giang’s “Virtual Playgrounds: Children’s Multi-User Environments for Playing and Learning with Science” will be of interest to all but the most casual reader. Both of these books deserve your time.