Skip to main content
Submitted by Matthew Johnson on 28 Nov 2008. 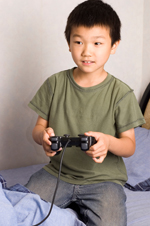 With Christmas approaching, video games are the one media industry that seems recession-proof, with games topping many wish lists. Parents, though, can find it difficult to tell just what they’re buying for their children. They may know about Grand Theft Auto, for instance, but may wonder what kind of sins are in Sins of a Solar Empire. Of course, nobody wants to disappoint their children: if parents decide not to buy Gears of War, will little Johnny be happy with Rock Band instead? Fortunately, there are both tools and techniques at hand to help parents identify games they might find inappropriate and also to pick appropriate games their children will like.

GamerDad is just what it sounds like: a blog written by an avid gamer who is the father of two young children. Posts on this site review games based on their general quality and their appropriateness for children. As well as content, they also take into consideration factors such as level of difficulty. GamerDad collaborated the National Parent Teacher Association and the Entertainment Software Rating Board to publish “A Parent’s Guide to Video Games, Parental Controls and Online Safety,” which you can download here. GamerDad’s strength is the love of gaming which its writers bring to the subject: they know the industry inside and out and are dedicated to bringing good, appropriate video games to children and families. The one drawback of this site is that it’s not especially comprehensive, so if you’re investigating a more obscure game you’re likely to be out of luck.

What They Play is an impressively thorough site which reviews nearly every commercially-released video game. Its front page covers recent and popular games, but the site can also be searched by platform (the console or computer system a game can be played on), genre, ESRB age rating, or any combination of the three. This is useful in a variety of ways: first, to help parents find games that are similar to the games their children want (a request for the M-rated Gears of War, for instance, might be met with the Teen-rated Battlefield: Bad Company or even the E-10+ rated Nerf-N-Strike.) As well, because it discriminates between different platforms, it gives parents more information about exactly what their children will be playing. For instance, Call of Duty 4 is rated M on many platforms, but the version released for the Nintendo DS is rated T.

Finally, as well as simply giving ratings information the site explains how the rating was determined and gives context (for instance, the title Rayman Raving Rabbids TV gets a rating of E10+ in part due to the presence of “Animated Blood,” but What They Play points out this appears only once, when a character receives a minor cut while shaving.) The site also features an annual Holiday guide, including recommendations of games for the family to play together.

Parents have a number of other ways of keeping tabs on what their children play. The easiest is to make sure that all gaming consoles and computers are kept in public parts of the house; even better is to make a point of playing your children’s favourite games with them. Whenever possible, rent or borrow a game to play it before buying; no matter how thorough a review you read, it’s no substitute for your own judgment.

As your children are playing, watch for content that you or they might find disturbing and ask your children questions about it: what values is the game teaching you? What attitudes is it communicating towards violence, sex or race? It’s also important not to assume that the game’s rating, or even its content, tells the whole story: many games have online chat functions, which allow players to talk to other people who are playing the same game online. There is very little supervision of this chat, and in some cases it can be extremely profane or violent.

Many of the most popular games give users the ability to create their own content, upload it, and download content created by other users: children playing games such as Spore (E10+) and Little Big Planet (E), which contain little or no objectionable content in their commercially released versions, might easily encounter user-created content that could be disturbing or inappropriate. As always, the best strategies are being involved and teaching your children to question what they see.

For a more thorough examination of this topic, check out the Video Games section.