Skip to main content
Submitted by Matthew Johnson on 05 Jan 2012. 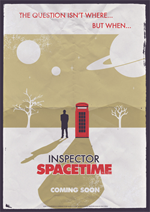 Surely you’ve heard of Inspector Spacetime, the cult British TV series that’s run (with interruptions) since 1962. It has a tremendously active, engaged fanbase that’s created blogs, videos and music devoted to it. Oh, and one more thing – it never existed. It was made up as a thirty-second gag on the sitcom Community, as a parody-cum-homage of Doctor Who.

But that didn’t stop the fans; within days of the episode’s airing, a genuine Inspector Spacetime fandom had emerged, devoted to celebrating and debating a show that never was. A message board was created to coordinate the creation of the show’s fictional canon, with fans receiving tips from the actor who played the Inspector on Community. The show’s producers took note of this response, naturally, and Inspector Spacetime has become one of the show’s running gags.

This sort of response is nothing new, of course: it parallels the relationship between Doctor Who and its fans, particularly in the long period when that show was off the air. Nor is the amount of work involved in creating this material that unusual – fan-fiction has been one of the mainstays of the Internet since the days of Usenet. What is perhaps unusual is that all of this started on Community, one of the lowest-rated shows on American network television and a likely target for cancellation at the end of this season (at the time of writing, it had been removed from the midseason lineup, with no return date announced.) The disconnect is obvious: if Community is so engaging that one of its throwaway gags inspires an entire fictional fandom, why aren’t more people watching it? But perhaps the reverse question is more important. Given the commitment that fans have to the show, are ratings measuring the wrong thing?

Of course, Nielsen ratings have come a long way from the days when Star Trek was canceled. As well as raw numbers, they also measure demographic data, and so far as the networks are concerned all viewers are not created equal: Community is one of the top-rated shows among young viewers with college degrees, but only if you count those who watch it after its initial airing (which adds a full 40 per cent to its viewership, an unusually high number). That’s a lot of qualifiers, though, and advertisers don’t generally count time-shifting viewers on the not unreasonable grounds that they’re likely to skip past the commercials. The fact that NBC has not announced if Community will return in the new year suggests that even with both demographics and time-shifting taken into account, the network is not happy with its numbers.

Advertisers may be right to be wary of shows, like Community, with small but devoted audiences: there’s little evidence that those audiences are any more likely to buy the products advertised than those who watch shows with larger but more casual viewerships. Even the example of Star Trek, which famously went from a canceled television series to a never-ending succession of movies and spinoffs, should be taken with caution. The short-lived series Firefly has a fanbase that is equally dedicated – in fact, you’re more likely to see a “Browncoat” in costume these days than a Trekkie – but Serenity, the feature-film follow-up, was a flop.

It would be a shame, though, if a show that inspires so much devotion were to become a victim of mass-market economics. It may be that to support shows like these, networks need to look beyond advertising as a source of revenue. One way to make money off a property with a small but loyal fanbase is through merchandising – Star Trek lived on in tie-in toys and novels for many years before returning to the screen, and the Wonder Woman comic is essentially a loss-leader to justify the existence of Wonder Woman merchandise. It’s only recently, though, that broadcasters have been able to sell niche content directly to viewers. HBO, for instance, has had tremendous success in using high-quality shows to lure subscribers; AMC uses the cachet of Mad Men, which has a similarly small but devoted viewership, to offset its more commercial (and cheaper) offerings of old movies; and Netflix is pioneering the idea of selling TV series directly to the viewer by reviving Arrested Development, a series whose appeal was very similar to Community’s. Ten years from now we may look back at Community as an early step in the evolution of how TV pays for itself – or as one of the last victims of the advertising-driven model.