Skip to main content
Submitted by MediaSmarts on 07 Jan 2011.

In this special guest blog, MediaSmarts intern and University of Ottawa Communications MA candidate Anton van Hamel looks at how parents can learn about and deal with potentially problematic video game content.

This Blog brought to you by the letter ‘M’

If you’re a parent, chances are there was at least one video game under the tree this Christmas. Even though your kids may be thrilled by a new title, as a parent you may be less enthusiastic. Even those of us who grew up with Alone in the Dark may balk at the detailed level of violence in Modern Warfare and Fallout: New Vegas, at least when considered as fare for kids. Both of these games receive an “M” rating, which means that they are considered unsuitable for players under 17; as with all other things, though, labeling these titles as ‘for adults only’ often makes them more appealing to the unintended youth audience. In addition to the violence question, there remain issues of meaning in videogames which are harder to track but no less important. So how concerned should parents be about indulging their children’s appetite for virtual violence?

A recent study published in the Psychological Bulletin has consolidated decades of research on videogames to assess what the effects are on players, confirming the popular view that videogames increase aggression. Aggression, though, is not the same thing as violence – though media reports often conflate the two. Psychologists generally measure milder forms of aggression because overt violent behaviour is too rare to predict within the scope of the average experiment. Even then, measures of aggression tend to be proxies for the real thing. Administering blasts of noise or electric shocks to an imaginary opponent are standard ways of demonstrating aggression in experiments, although some studies rely on questionnaires. Still others include verbal aggression, aggressive thoughts, and reporting aggressive feelings. Zeroing in on only those studies which measured the best proxies for real-world violent behaviour, the review concludes that a child’s exposure to violent games (not just videogames in general) accounts for between two and three percent of their violent behaviour in the present. Tracked over time, exposure to violent games accounts for between 0.2 and one percent in changes to violent behaviour, and it is consistently in the increasing direction (incidentally, girls and older teens remain susceptible to these effects.) The good news for parents is that although the effect of violent games is real, it is small enough that it can be curbed by parental involvement.

Modern games frequently have screenplays as long as any blockbuster movie and may take dozens of hours to play through in single-player mode. Online multiplayer games may involve many more hours of play and are different every time depending on the other players involved. As a result, the problem of previewing and reviewing videogames is one of skill: in most games you need spend several hours to advance far enough to see most of the content. Getting killed early on isn’t just frustrating, it prevents parents from becoming familiar with what their children might see later as they play on. Thankfully, Web sites that feature user-generated content, such as YouTube and Wikipedia, have made videogame content a more or less open book. For parents concerned with the broad strokes, games ratings by the ESRB cover community standards of offensive content. Parents who are concerned with more nuanced themes like sexism, branding and commercialism can consult CommonSense Media reviews to get ratings of games as well as a synopsis written from a parent’s point of view. For parents who want to dive in deep or personally preview specific, controversial chapters from a game (like the sex scenes from Mass Effect or Dragon Age), game “walkthroughs,” which are recordings of live gameplay, freely viewable on YouTube are an easy way to preview as much of the content of a game as you want. These will give you a better feel for what the game is actually like compared to the sensory overload from trailers or industry reviews. Below is a table with examples. (Parents with smartphones may want to download the ESRB or Cedemo to get more info while shopping.)

Armed with this information, parents who are not gifted players themselves can still make good choices about what to buy, where to set boundaries, and also get familiar enough with games to have meaningful discussions about the content with their kids.

What we know about videogame effects has been determined by which questions people ask or deem important. Videogame research has been an echo of earlier media investigations on movies and television which were also concerned by the popularity of violent anti-heroes. Then as now, the belief was that these productions would serve as ‘how-to’ manuals for budding criminals and this dominated research in the field. But changes in aggression are not the only influence a videogame can have on a person. Would you express the impact a song or a movie had on you strictly in numbers and strictly in changes to one emotion? Something important is missing from that experience when it gets reduced to a formula. As a cultural product kids spend so much time with, videogames undoubtedly leave a complicated mark on players. Yet because the player brings something of their own experience to the game, that mark changes from person to person. Missing from the chart above is World of Warcraft: Cataclysm, although many kids were begging for it this holiday season. The game bears the mark of T (teen) for cartoon violence, but as with any MMORPG it can’t realistically be rated for all the content that players will add to it. Playing totally solo, playing with friends, and playing with strangers are quite different experiences. On top of that, playing in a loose informal group is distinct from joining a tight, hierarchal guild with a strict regimen of raids at appointed times. As with the rest of the read-write web, what attracts players to these games is the sense that they are partially authoring the story and making the meaning of it, rather than just extracting it from a finished product they have no control over. Adding co-players to the mix makes it impossible to assign a letter-rating to that kind of game or predict a single, uniform outcome for players. Some people credit their real-life leadership skills to online gaming experiences, an area which is just starting to be researched. If a game can train an aggressive impulse via repetition, it could realistically train teamwork the same way.

Although the bread-and-butter of World of Warcraft remains slaying monsters and building a stronger and stronger character, gamers find new ways to play as well. Noor is a famous character who is challenging himself to reach the highest level possible without killing (or even aiding in the killing) of another creature. Drrum is more interested in collecting exotic pets in-game and making tableaus of them with her character in matching costumes. Golis and Retnbarb are a father and son duo who use the game as an activity they can do together when dad’s job takes him on the road. Artio takes the idea one step further and has an entire guild populated mostly by extended family. Ironically, the low barriers to join the game and the flexibility of its content are both a risk for inappropriate content but also the solution to it. Any stranger can sign up to play, but so can any parent if they’re interested. 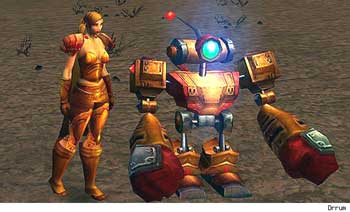 Beyond purchasing decisions and time-limits, the ideal remains getting your hands dirty and playing games alongside your kids. Parents who are gamers themselves take the most active role of all when mediating their kids’ gameplaying. A recent study from the Netherlands showed a relationship between parents’ own gaming habits and more consistent mediation and regulation of their kids’ playing: parents who play games themselves are more willing to not only play with their kids, but also more likely to exercise controls like choosing which games they allow their children to play and setting time-limits. Getting more actively involved also meant parents were in the right place at the right time to comment on game content and emphasize where it departed from what is real or morally acceptable. If you resolve to do just one thing about your kids’ gaming in the new year, joining in and playing a videogame with them is probably the single best option.

MediaSmarts has comprehensive resources on the media violence debate as well as a tip sheet for parents on dealing with video game play in the home.

Aggression is just one of many things children might learn about from a videogame. New research is examining whether kids learn civic engagement skills like cooperation from online games:

“Call of (civic) duty: Action games and civic behavior in a large sample of youth” (2010)