Skip to main content
Submitted by Matthew Johnson on 25 Jan 2008.

The term “Web 2.0” was coined to describe (and, in part, predict) the rise in user-created content on the Net. Recently there have been two stories that show interesting developments in Web 2.0’s evolution: bumps in the road to the anticipated convergence with television, and the rise of 2.0 as alternative journalism.

First is the news that MTV’s user-generated channel MTV Flux is being closed by the parent company after just fifteen months of operation. If one were to imagine a typical audience for Web 2.0 content, it would be MTV’s viewers: the kind of people who have an endless appetite for aspiring popstars singing in their basements, piano-playing cats and tearful teens begging the media to “leave Brittney alone” (to name three of 2007’s most popular videos.) While there might be any number of reasons for MTV Flux’s cancellation, its failure raises the question of whether Web 2.0 might be nearing the end of its adolescence. 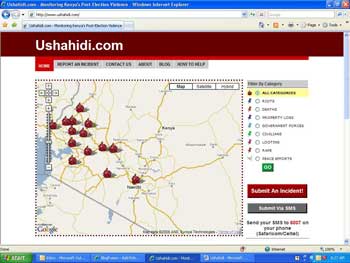 Ushahidi.com is another example. Ushahidi means “witness” in Swahili, and Ushahidi.com is a collaborative website – a sort of cross between Wikipedia and Google Earth – in which users can submit reports of events in the current Kenyan crisis. These are organized into categories such as “Riots,” “Property Loss” and the recently-added “Peace Efforts” and marked on a map of Kenya (both road and satellite maps are available.) Says Ory Okolloh, one of the site’s creators:

We believe that the number of deaths being reported by the government, police, and media is grossly underreported. We also don’t think we have a true picture of what is really going on - reports that all of us have heard from family and friends in affected areas suggests that things are much worse than what we have heard in the media.

A common criticism of the Web has been that it caters to the short attention spans supposedly found in the “MTV Generation,” and Web 2.0 sites like YouTube have encouraged that impression. Ushahidi gives us an example of a user-generated site that not only avoids that but hopes to have the opposite effect:

Kenyans have demonstrated their capacity for selective amnesia time and time again. When this crisis comes to an end, we don’t want what happened to be swept under the rug in the name of ‘moving forward’ – for us to truly move forward, the truth of what happened needs to be told - Ushahidi is our small way of contributing to that.

And that, perhaps, deserves to be on the Internet as much as a piano-playing cat.