Skip to main content
Submitted by Matthew Johnson on 04 Jan 2010.

If anyone still doubts that youth need to learn how to evaluate online information, those doubts should have been dispelled by a recent hoax perpetrated by the group called the Yes Men. This group, which has a history of staging fake press conferences, decided to draw attention to Canada’s position at the Copenhagen conference on climate change by creating a number of fake Web sites purporting to be, among others, the Copenhagen summit site, the Wall Street Journal, and Environment Canada’s site. While it didn’t take long for Environment Canada to make a statement exposing the hoax, by that time many journalists had reported the story as fact and the story had been widely distributed by wire services. 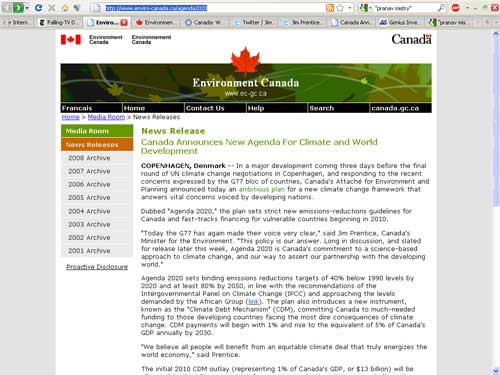 If professional journalists can’t recognize a hoax of this kind, is it fair to expect students to be able to judge the material they find online? The fact is that there were a number of steps that reporters could have taken, and tools they could have used, to check the accuracy of this story – steps and tools that are available to anyone.

The first thing that should have raised a red flag was the URLs or Web addresses of the sites. The fake Environment Canada site’s URL was http://www.enviro-canada.ca, compared to the real Web address which is http://www.ec.gc.ca (all Government of Canada Web sites end in “gc.ca.”) While a student might not know this (though one would expect a reporter to), one easily available clue that there was something wrong with the URL was the fact that the actual site’s URL was listed at the top of the page, under the Environment Canada logo. As well, all of the links on the page (which the Yes Men copied from the actual site for verisimilitude) lead to pages on the real site. In other words, every URL associated with the site except the site’s “main page” have the “gc.ca” suffix.

One of the cleverest aspects of the hoax was that it did not rely just on a single fake site to get its message out. To make the story more convincing, the hoaxers created fake sites for the Copenhagen summit, and the Wall Street Journal that reported their story as fact. This shows the dark side of the notion of “reliable sources”: many other journalists who covered the story quite likely gave it credence because they thought it had appeared in the Journal, a newspaper with a nearly impeccable reputation. Indeed, when Environment Canada released a statement condemning the hoax and complaining that many news sources had fallen for it, the example they gave (and linked to) was the fake Wall Street Journal story. The Journal site was a very convincing spoof, but again the URL was a clue to its true nature. Here, though, the Yes Men had been particularly clever: they chose to spoof the Journal’s Europe page rather than the main page, most likely thinking readers would be less likely to recognize that their URL (http://www.europe-wsj.com) was not the correct one (http://www.europe.wsj.com.) 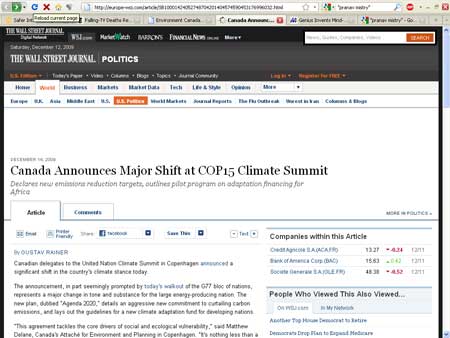 What else might have given these fake sites away? One useful tool is to conduct a link search. While it’s easy enough for a spoof site to copy outgoing links, as the Yes Men did on both the Environment Canada and Wall Street Journal sites, it’s harder to reproduce the links that lead to a page from other sites. By using the link: operator in a search engine such as Google, we can see that there are no sites linking into http://www.europe-wsj.com, while more than 3,000 sites link to http://online.wsj.com/europe. Another valuable tool is the Alexa Web site, which provides statistics on Web site traffic and allows you to determine how long a Web site has been in existence; for instance, the http://www.enviro-canada.ca site had no traffic whatsoever before December 7th, while the English home page of the Environment Canada Web site has had consistent traffic going back as far as Alexa reports it (though visits naturally spiked in December.) Similarly, the Twitter account that purported to belong to Minister of the Environment Jim Prentice – with which he apparently confirmed the press release – only came into being on December 11th. (Twitter should never be considered a reliable source, of course, given how easy it is to create fake accounts.)

None of these steps or tools of course, is of any value if they’re not used. What’s most important is to develop a healthy skepticism towards every source you might use. In pre-Internet days it may have been enough to check the credentials of a supposed authority; now, as we’ve seen, the ease of publishing a convincing fake online means you can’t even assume that source is who it claims to be. Instead we have to develop habits of mind that will let us spot indications that something is unreliable. One example on the false Environment Canada site would be the fact that the press release is not available in French (an odd oversight, given the Yes Men’s otherwise very thorough approach.) A bigger clue is simply the unlikelihood that the Canadian government would reverse its position to that degree on this issue. Of course, this was what made it such a good story, but that’s no excuse for not doing the due diligence of investigating your sources.

With the number of media outlets available to us today, and the ease with which people can create and distribute material on the Internet, it’s important that all of us develop critical filters and habits of mind. Even for journalists, who are trained to be skeptical, it’s easy to cut corners (for instance, assuming that the various fake sites created by the Yes Men corroborated one another.) The time is past when we could trust a news outlet to judge for us whether something is true or not: for good or ill, we all must now learn and exercise the investigative skills of good journalism ourselves.