Skip to main content
Submitted by Lynn Jatania on 14 Jun 2019.

I read an interesting Facebook post the other day, written by a teenaged girl. She said quite firmly that it was important for parents to not have their children’s passwords, for their phone or social media accounts. She talked about building trust and how insisting on knowing your kids’ passwords is the first step to them sneaking around online and getting involved in things you wish they wouldn’t.

This was a bit of an eye-opener for me. We’d always followed the rule that you should monitor your kids’ online activity. When our oldest got his first smartphone at age 13, we did ask to have the password to it. We didn’t really intend to check his phone without his knowledge, and in fact, we never have. We just wanted him to know that we could check it, which we hoped would be enough to make him think twice about what he was using his phone for. 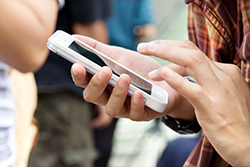 It didn’t occur to me that by insisting on knowing his password, we were actually telling him that he wasn’t trustworthy – both hurting the lines of communication between us, and possibly encouraging him to work around the rules by creating fake accounts or otherwise trying to hide his activity online.

We’ve been lucky, perhaps, that our oldest rarely uses his phone for anything except watching YouTube videos, and is a strict rule-follower, giving us little to worry about. But the next one down – our 14-year-old daughter – is much more socially active with her smartphone.

Like her older brother, when she first got a phone at age 13, we insisted on knowing the password. A few months ago, I tried to unlock her phone to check the battery life on it – I wanted to steal the charger for my own phone if hers was finished – and discovered that the password had been changed.

I wasn’t sure what to do. On one hand, it was a rule that we were supposed to have the password. On the other hand, we never had made use of that password and never really intended to. Enforce the rule, or let this one slide?

The Facebook post by the teen girl has decided it for me, at least for now – we won’t push it, and won’t ask her to give us the new password. Perhaps it makes her feel more comfortable, when talking to friends, to know that her texts are absolutely private. Perhaps she needs a space that is only for her, as she grows up and grows more independent. Perhaps her new password is just something easier to remember.

Whatever the reason she changed it, I’ve decided I’m okay with it. We are still “friends” with all her social media accounts, and when she’s on her phone and we ask her who she’s chatting with, and about what, she’s happy to share. I think not demanding we have her password – and not using it to check up on her behind her back – means that she’ll continue to be open and honest with us when we ask questions. Hopefully, if we show her some respect, she’ll follow our example.

She’s old enough now that it’s time to give her room to grow and show us that she’s ready for more responsibility.

Do you know your kids’ phone passwords? Would you ever make use of it to check up on them?

Check out the tutorial The Parent Network for help on making these decisions, as well as questions you can ask your kids to kick-start your conversation about online issues.