Skip to main content
Submitted by Matthew Johnson on 18 Jun 2008.

Note: this is the fifth in a series of blogs looking at the history and future of Web 2.0 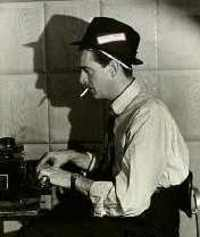 The user-participation culture of Web 2.0 has begun to change the worlds of music, movies, animation, games and even encyclopedias, but in no area does the change promise to be as deep and fundamental as in the world of news. While other aspects of user-created content blur the line between authors and audiences, the line remains there: it still takes tremendous skill and effort to make a mashup or a fan movie, even if Web 2.0 has made those things easier to distribute. Some have suggested, though, that it will change journalism in a much more radical way – perhaps altering our idea of what journalism is entirely.

Like other media, journalism has essentially two functions: to create content and to distribute it. Where journalism differs from the other media we’ve looked at is that its content is created in two distinct steps, which we might call collection and processing. News, after all, does not come from nowhere: it has to be found and researched before being reported.

It is in this first area, the collection of news, that Web 2.0 has so far had the most impact. A good example is the recent riots in Tibet. In an area that is kept under a tight lid at the best of times, most news outlets would have had little hope of getting footage of these riots under the watchful eye of Chinese authorities. Thanks to the widespread use of camera cell phones, though, unfiltered images of the riots made their way to the press, providing a powerful counterpoint to the state-authorized footage the Chinese government had released. User-contributed photos and videos like these have become so common that CNN has even set up a site, iReport, to feature them; many of those which are ranked as “newsiest” (a word that sounds as though it was coined by Stephen Colbert) are used on the air. This sort of thing is hardly new, of course: many of the best news photographers, such as Weegee, were freelancers, and amateurs have been providing important footage at least as far as the Zapruder film. What is different now is the scale on which it is happening, the sheer number of potential photographic witnesses to any event.

Some, though, are looking to Web 2.0 to change the processing side of the news as well – or even change the definition of what news is. EveryBlock is a site that focuses on local news that tends to fly “under the radar” of the commercial media. As they put it, “Every day, a wealth of local information is created — officials inspect restaurants, journalists cover fires and Web users post photographs… We aim to collect all of the news and civic goings-on that have happened recently in your city, and make it simple for you to keep track of news in particular areas.” So far available only in Chicago, New York and San Francisco, EveryBlock has a mission similar to that of Front Porch Forum, examined in our last instalment; unlike that site, though EveryBlock uses a mix of user-contributed content and more formal news sources such as crime reports, building permits and restaurant inspections. Essentially, EveryBlock lets its users decide what is “newsy,” providing raw information and trusting the readers to choose what is important to them.

A site that is in some ways the opposite of EveryBlock is LiveStation, which provides live news feeds from a variety of stations in the United States and around the world. Rather than providing information that has traditionally not been regarded as news, as EveryBlock does, Live News Cameras gives its users access to news sources they might not otherwise have, such as Al Jazeera or CCTV China. The site also allows users to embed these feeds on other sites, allowing them to incorporate these news sources into a larger work. This allows users to control the third aspect of journalism, distribution.

The ultimate goal of 2.0 journalism may be the adoption by users of all three roles – collector, processor, and distributor of news. This idea has given rise to the term “citizen journalist” to describe someone who does some or all of these things, either as an individual or part of a group. Citizen journalists have been front and centre in this year’s U.S. presidential campaign, mostly working for small organizations such as PurpleStates.tv and the Huffington Post Web site, although both PBS and MTV have also sponsored them. In some ways these citizen journalists challenge the notion of what a journalist is: though some are paid, none are professional journalists, and the use of the term “citizen” implies that journalism can be viewed as a kind of civic duty – akin to serving on a jury. This meshes with EveryBlock’s ethos: that citizens should be providing news as well as consuming it, though most of that site’s news items still come from either government or established news outlets.

The deprofessionalizing of journalism may have its downsides. For one, news readers and viewers will likely need to become more sceptical consumers as it becomes easier to be a news broadcaster. Given the amount of disinformation already present on the Net, it seems certain that some will seize upon the rise of citizen journalism to spread hoaxes and lies. (It’s hard to say whether the popularity of “fake news” outlets such as The Daily Show means consumers will be more or less likely to tell real news from false.) As well, some of the experiences of citizen journalists throw into question one of the core tenets of traditional journalism, objectivity. Of course, the objective press is a fairly new idea – most newspapers were solidly partisan for most of their histories – and even today this is a questionable proposition. In nearly all cases, though, traditional news outlets maintain at least a semblance of objectivity – something that is rarely found in citizen journalists. Instead “citizen” is often a synonym for “activist”; for example, in the case of the Media Mobilizing Project, an organization devoted to putting the tools of journalism into the hands of mostly immigrant low-income Philadelphians, journalists may not even be citizens or legal residents of their country. “We are uncomfortable with the term ‘citizen journalism,’ ” Todd Wolfson, one of the project’s organizers, told the New York Times, saying that he prefers the term “community journalism.” A similar site is The Hub, which describes itself as “an interactive community for human rights.” The Hub is an explicitly issue-driven site that aims to use citizen journalism to promote human rights worldwide; users can contribute and view videos, three of which are selected by the editors as the “most urgent” of the week.

Are Everyblock and The Hub the future of journalism? It’s certainly likely that the ideas each represents – unfiltered news access and transparent advocacy – will transform the news business. After all, the partisanship of news organizations like Fox News or Xinhua are largely open secrets; in an age of scepticism, or at least cynicism, where more than half of Americans say they don’t trust the press, being open about your biases may be the best way to win trust.