Skip to main content
Submitted by Matthew Johnson on 15 May 2009. 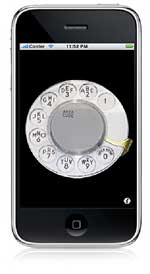 It’s a persistent phenomenon: the faster we move into the future, the more we find it embedded with the bones of the past. Why else, for instance, would we still talk about “dialling” a phone, and later about “hanging it up”? Few people remember the early TV remote controls that worked by sending high-frequency sounds, but we still call remotes “clickers.” We still say “stay tuned,” “CC” (carbon copy) e-mails, “rewind” DVDs, and “post” online messages. Even new media darling YouTube contains an old-media artefact of this kind: the name is obviously meant to make us think of television, the “boob tube,” but few TVs have tubes in them anymore.

These kinds of throwbacks aren’t just linguistic, they’re found in technology as well. Most often these come from a failure to rethink assumptions, or an aesthetic attachment to the old technology – think of the wood paneling found for so long on cars, a relic from the time when a station wagon was really a wagon – but sometimes they are intentional design choices. An amusing example is Betamaxmas, which uses the Web to recreate the experience of watching TV sometime in the early 1980s. The site’s content is made up of old TV shows and commercials, but what sets it apart is the presentation: a rabbit-eared TV sitting in front of a faux wood paneling wall, framed by a Christmas tree and grey cloth couch in the foreground. It’s easy to dismiss the site as nostalgia – and that’s certainly what it is – but what’s interesting here is that the main purpose of the interface is to limit the user’s control. While the content of this site comes from YouTube, the interface is decidedly analog: a genuine “clicker” whose only controls are Channel Up and Down, Volume Up and Down, and Fullscreen (which zooms in on the screen, though the TV remains in frame.)

What is the difference between pressing the button on a remote control (or clicking a cursor on a picture of a button on a remote control) and typing in the search box of YouTube? The answer may be that the former is a tactile experience, albeit a simulated one. Look at all of those old-technology holdovers in our language – how many of them refer to a physical activity such as dialling, rewinding and clicking? As technology becomes increasingly digital, both in the sense that it is entirely computer-based and in the sense that our digits are the only part of our body that interacts with it, we may feel the lack of a tactile connection. More and more, technology is taking tasks that used to be done in the physical world and making them virtual. Consider the progress from the vinyl LP to the CD to the digital music player: from the tactile experience of fitting a needle into the groove (and seeing it skip if something went wrong), to putting a disc into the tray and watching it spin, to the inscrutable workings of a tiny metal and plastic box. Even as recent a technology as the fax has been virtualized: all of the physical properties of the task of faxing – printing a document, placing it in the machine, keying in (dialling?) the fax number, listening to the dial tone and eventual handshake noise, receiving the confirmation and reply on slick, curly paper – have been replaced by a direct computer-to-computer process.

Some new technologies try to incorporate a physical experience. The most successful digital-tactile hybrid is the iPhone, which uses accelerometers to translate actions – tilting, turning or shaking the phone – into digital processes. Some of the most successful apps for the iPhone have been those that directly reproduce tactile experiences: maze games, like those that once filled innumerable car-trip hours, in which a ball is guided through a maze; virtual Zippo lighters for holding up in tribute at rock concerts; and even applications, like the one pictured above, that turn it into a rotary phone. E-book readers, similarly, compete with one another to most fully reproduce the physical experience of reading a book: the Kindle’s “paper” screen, the tactile page-turning feature in Classics app for the iPhone, and the leather cover of the Sony e-Reader.

More evidence that we miss the tactile properties of old technology can be found in books such as The Dangerous Book for Boys and The Mysterious Benedict Society, both of which deny or at least ignore the virtual world. The first of these offers advice on a variety of old-school children’s activities such as building a fire, tying knots and folding paper airplanes; the second, a novel, features young protagonists who employ similar skills to foil an evil plot to brainwash the world’s children through TV. Although The Mysterious Benedict Society is ostensibly set in the present, the Internet is oddly absent: the characters are brought into the action by a classified ad in the newspaper, dictionaries and encyclopedias are consulted when information is needed, and Morse code is used in place of cell phones. Again, nostalgia is undoubtedly a factor here – the former book could easily be titled The Dangerous Book for Dads – but there’s also a genuine longing for a more physical, tactile world.

The irony is that being denied access to that physical world is a big part of what’s driven young people online; as writers such as Anastasia Goodstein and Dr. Tanya Byron have suggested, a lack of unstructured play is due largely to exaggerated fears of the dangers of letting kids go unsupervised – when in fact most parents of young children today grew up at a time when the crime rate was significantly higher. This has made the Internet the only place youth can go to experiment, test their limits and escape adult scrutiny, while parents look at their wired, over-scheduled children and feel pangs of nostalgia for their own days of racing bikes, burning ants with magnifying glasses, skinning knees and occasionally needing booster shots for tetanus.

How will the current generation of children feel about this? Most of the technologies that try to bring a tactile experience into the virtual world – the iPhone, the Wii – are aimed primarily at adults, not kids. Will today’s children eventually feel the lack of the physical in their online lives, or will they simply accept a world experienced only through the eyes, ears and fingertips?