Skip to main content
Submitted by Matthew Johnson on 22 Jun 2009. 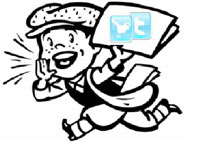 The history of the Internet – and the history of technology in general – could be described as one big demonstration of the doctrine of unintended consequences: a system designed to help researchers collaborate, and developed to protect military communications in the event of a nuclear war, wound up being used primarily for shopping, socializing and entertainment. The same is true of many of the products and services on the Internet as well. In its early years it was mostly seen as a one-to-many broadcast medium, like TV or radio, but over time it’s the more interactive elements that have proven to be most popular, with users producing at least as much online content as professionals.

One such development that may be in its infancy is the relationship between news gathering and the Internet. So far that relationship has been a largely one-sided one: professional news organizations gather their news the old-fashioned way and then post it to the Internet, where it attracts readers and advertising dollars. Increasingly, though, the Internet is also being used to gather news. One online service being used for both roles is one that’s frequently dismissed as the most trivial, Twitter.

Twitter, as most people likely know by now, is what’s known as a “microblogging” service: users post short (140 characters or less) messages called “tweets” which are delivered instantly to anyone who subscribes to, or “follows,” their feed. For many critics that character limit exemplifies the pointlessness of Twitter, and it’s true that many tweets are trivial, while many more serve as promotional materials, providing links to blog posts or photos. It’s also true that, for all its Web 2.0 credentials, Twitter is closer to the broadcast model than many other Internet services, with ten per cent of Twitterers accounting for ninety per cent of tweets. As a result, many have dismissed Twitter as a tool for narcissists or celebrity-stalkers.

The one feature those critics miss – the thing that has made Twitter so important in both making and gathering the news – is that it is searchable. Though you only get a feed of messages from people whom you follow, you can also search every public tweet for key words or phrases. To make this easier, tweets on a particular topic are often prefixed with what’s called a “hashtag,” a word prefixed with the number sign as a sort of label (so a message about Twitter itself would bear the hashtag “#Twitter”). Finally, the Twitter home page shows a constantly updated list of the most discussed phrases, words or hashtags. Because Twitter is updated in real time, it can be used to gather eyewitness accounts, opinions and even photos more quickly than any news outlet could manage.

The use of Twitter for newsgathering first became widely known during the 2008 Mumbai terrorist attacks, when the general chaos of the situation, as well as the limited ability of Western media outlets to cover the attacks first-hand, made it the most reliable source of information about what was going on. Twitter then went on to beat The New York Times on its own turf when a user tweeting from his iPhone broke the story of US Airways flight 1549’s crash landing in the Hudson River.

Where Twitter has really come into its own, though, is the protests following the Iranian election. What makes Twitter so important in this situation is the unusual combination of a literate, educated, Internet-connected urban population and a regime that is willing and able to censor its media. Even before the election Iranians turned to the Internet for opportunities to speak out without censorship (Iran has the third-largest number of bloggers of any nation). But the disputed results of the vote, and the rallies that followed, have caused a flood of tweets. Because tweets can be read from a variety of platforms – the Web site itself, applications that provide a direct Twitter feed, and even cell phones – it’s particularly resistant to censorship, making it an ideal tool for organizing and disseminating information when other media are blocked or state-controlled. As of this writing, “#iranianelection” is the number one topic on Twitter, with more than a thousand tweets being posted every ten minutes.

Watching the feed of all tweets with the #iranianelection tag is an interesting, nearly addictive experience. There’s definitely a sense that this is a watershed moment, not only in the history of Iran but in the history of journalism; as one poster put it, “There’s a revolution going down. I’ll never be able to take the news seriously again, not after seeing what Twitter can do.”

It’s unclear, though, how much of what’s on Twitter is actually news, particularly now that the story has become so widely known. Unlike during the Mumbai attacks, when most of the tweets were coming from the event itself, at this point Iranian Twitterers are probably a minority compared to people from North America and Europe. Many of those are commenting on the events rather than participating, or are piggybacking on the topic to push their own political ideas (“This is what happens when the people are disarmed”) or conspiracy theories (“If Israel is ever going to attack and destroy the nuclear facilities, wouldn’t now be the premier time due to #iranelection?”). The sheer number of tweets has also left some readers feeling overwhelmed; as one put it, “The tweets in #iranelection are so voluminous, how can you read each one in order to decide which you can trust, which you can’t?”

Indeed, credibility is a major issue when using Twitter as a news source: as well as random pranksters (one tried to highjack the discussion to spread a rumour that Apple CEO Steve Jobs had died), there is a suggestion that the Iranian government has begun to use Twitter to spread disinformation instead: one repeated tweet is “DO NOT RT [re-tweet] anything U read from ‘NEW’ tweeters, gvmt spreading misinfo.” Beyond that possibility is the issue that there is virtually no way to confirm anything reported by Twitter: the message “RT Army moving into Tehran against protesters!” appeared dozens if not hundreds of times, often prefaced by the word “confirmed,” but there was no way of knowing if it is true. Some users claiming to be Iranian have posted photos, but in this age of Photoshop they add little credibility. To make matters even more confusing, reported efforts by the Iranian government to block access to Twitter have led to calls for all Twitterers to change their time zone settings to Tehran in a sort of “I am Spartacus” manoeuvre, meaning that it’s now harder than ever to know where someone is actually posting from.

In this one event, Twitter has shown its strengths, weaknesses and potential as a tool for journalism. Despite the concerns, it’s almost certain that the Twitter feed will be a major source of information for almost any event of importance in the future. But at the same time it cannot be taken with any more confidence than an overheard conversation. Perhaps in the future news providers will designate “Twitter reporters” whose job it is to monitor trending topics, search the feed for the information that is most probably relevant and reliable, and co-ordinate with their offline colleagues to confirm what’s being reported. In the meantime it falls to news consumers to develop new critical thinking tools for sifting out the truth.