Kids represent an important demographic to marketers because in addition to their own purchasing power (which is considerable) they influence their parents’ buying decisions and are the adult consumers of the future.

According to the 2008 YTV Kids and Tweens Report, kids influence:

As a result, industry spending on advertising to children has exploded over the past two decades. In the United States alone, companies spent over $17 billion doing this in 2009 – more than double what was spent in 1992.

Parents today are willing to buy more for their kids because trends such as smaller family size, dual incomes and postponing having children until later in life mean that families have more disposable income. As well, guilt can play a role in spending decisions as time-stressed parents substitute material goods for time spent with their kids.

Here are some of the strategies marketers employ to target children and teens:

“We’re relying on the kid to pester the mom to buy the product, rather than going straight to the mom.”
Barbara A. Martino, Advertising Executive

Today’s kids have more autonomy and decision-making power within the family than in previous generations, so it follows that kids are vocal about what they want their parents to buy. “Pester power” refers to children’s ability to nag their parents into purchasing items they may not otherwise buy. Marketing to children is all about creating pester power, because advertisers know what a powerful force it can be.

According to the marketing industry book Kidfluence, pestering or nagging can be divided into two categories—”persistence” and “importance.” Persistence nagging (a plea, that is repeated over and over again) is not as effective as the more sophisticated “importance nagging.” This latter method appeals to parents’ desire to provide the best for their children, and plays on any guilt they may have about not having enough time for their kids.

The marriage of psychology and marketing

To effectively market to children, advertisers need to know what makes kids tick. With the help of well-paid researchers and psychologists, advertisers now have access to in-depth knowledge about children’s developmental, emotional and social needs at different ages. Using research that analyzes children’s behaviour, fantasy lives, artwork, even their dreams, companies are able to craft sophisticated marketing strategies to reach young people. For example, in the late 1990s the advertising firm Saatchi and Saatchi hired cultural anthropologists to study children engaging with digital technology at home in order to figure out how best to engage them with brands and products. [2]

The issue of using child psychologists to help marketers target kids gained widespread public attention in 1999, when a group of U.S. mental health professionals issued a public letter to the American Psychological Association (APA) urging them to declare the practice unethical. Although the APA did not outright ban psychologists from engaging in this practice, as a result, the recommendations of their final report in 2004 included that the APA “undertake efforts to help psychologists weigh the potential ethical challenges involved in professional efforts to more effectively advertise to children, particularly those children who are too young to comprehend the persuasive intent of television commercials.” [3]

Canadian author Naomi Klein tracked the birth of “brand” marketing in her 2000 book No Logo. According to Klein, the mid-1980s saw the birth of a new kind of corporation—Nike, Calvin Klein, Tommy Hilfiger, to name a few—which changed their primary corporate focus from producing products to creating an image for their brand name. By moving their manufacturing operations to countries with cheap labour, they freed up money to create their powerful marketing messages. It has been a tremendously profitable formula, and has led to the creation of some of the most wealthy and powerful multi-national corporations the world has seen.

Marketers plant the seeds of brand recognition in very young children, in the hopes that the seeds will grow into lifetime relationships. According to the Center for a New American Dream, babies as young as six months of age can form mental images of corporate logos and mascots. Brand loyalties can be established as early as age two, and by the time children head off to school most can recognize hundreds of brand logos.

While fast food, toy and clothing companies have been cultivating brand recognition in children for years, adult-oriented businesses such as banks and automakers are now getting in on the act.

Magazines such as Time, Sports Illustrated, Vogue and People have all launched kid and teen editions—which boast ads for adult related products such as minivans, hotels and airlines.

The challenge for marketers is to cut through the intense advertising clutter in young people’s lives. Many companies are using “buzz marketing”—a new twist on the tried-and-true “word of mouth” method. The idea is to find the coolest kids in a community and have them use or wear your product in order to create a buzz around it. Buzz, or “street marketing,” as it’s also called, can help a company to successfully connect with the savvy and elusive teen market by using trendsetters to give their products “cool” status. 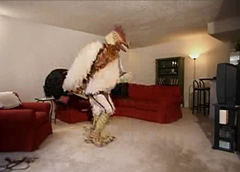 Buzz marketing is particularly well-suited to the Internet, where young people in particular use social networking platforms to spread the word about music, clothes and other products. It should come as no surprise that the top ten viral marketing campaigns (as of 2008) relied heavily on YouTube, Hotmail and Facebook to reach hundreds of millions of viewers—and this was before Twitter became a mainstay of social media. For example, when Burger King re-launched its ‘Subservient Chicken’ TV commercial online in 2004, it attracted 15 million hits within the first five days and more than 450 million hits over the next few years. [4]

School used to be a place where children were protected from the advertising and consumer messages that permeated their world—but not any more. Budget shortfalls are forcing school boards to allow corporations access to students in exchange for badly needed cash, computers and educational materials.

Corporations realize the power of the school environment for promoting their name and products. A school setting delivers a captive youth audience and implies the endorsement of teachers and the educational system. Marketers are eagerly exploiting this medium in a number of ways, including:

In addition, companies are also recognizing the advantages of developing positive brand associations through facilitating school field trips. In the U.S., the highly successful company Field Trip Factory delivers children to companies for “real-world lessons on everything from nutrition to health care.” For example, students may visit a car dealership to learn about car safety. This is seen as a win-win situation by many educators and retailers because it lets children have hands-on experiences outside their classrooms, while building positive associations between companies, students and their parents and teachers. [5]

The Internet is an extremely desirable medium for marketers wanting to target children:

The main ways that companies market to young people online include:

For more information on how marketers are targeting kids online, check out the Online Marketing section.

In 2008, an estimated 17 million children watched the Superbowl with their families. Alongside the football, they also watched a number of highly creative and engaging ads for beer and alcohol.

The marketing of adult entertainment to children has been, and continues to be, an ongoing issue between government regulators and various media industries. In a report released in 2000, the U.S. Federal Trade Commission (FTC) took movie, music and video games industries to task for routinely marketing violent entertainment to young children. Subsequent reports since then have shown that although advances have been made – particularly within the video game industry – there are still many outstanding concerns relating to the frequency that adult-oriented entertainment is marketed to children and the ease with which many under-age youth are able to access adult-rated games, movies and music. [6] Specific areas where the FTC is calling on entertainment media to improve on include restricting the marketing of mature-rated products to children, clearly and prominently disclosing rating information and restricting children’s access to mature-rated products at retail. [7]

In its latest, 2009 report, the FTC particularly noted the challenges presented by emerging technologies in facilitating easy access by children to adult-rated entertainment.

The real challenge is that promotion

of adult-oriented entertainment does not necessarily fall within the parameters outlined by regulatory agencies such as the FTC. For example, Nickelodeon’s 2011 Kids Choice Awards were hosted by hip-hop artist Snoop Dog, who, in addition to producing music that is not rated for children, is also a spokesperson for the fruity alcoholic beverage, Blast. Alcohol companies also use social networking platforms like Facebook to humanize their brands and make it easy for customers to ‘connect’ with their products.

Co-Co's AdverSmarts: An Interactive Unit on Food Marketing on the Web
Game