When discussing media representation of various groups, especially those we consider marginalized, stereotypes are often a primary concern. But breaking a stereotype may not go far enough, and the issue may be more complicated than merely determining whether or not a character is represented in a positive or negative way. The section that follows explores different approaches to 2SLGBTQ+ content by analyzing various ways that popular media have characterized 2SLGBTQ+ people.

One of the most difficult things about representations of 2SLGBTQ+ people in media is that there will rarely be a single verdict on any given cultural product. With the exception of the most simplistically supportive or bigoted representations, there’s room for much discussion and debate in determining a positive or negative 2SLGBTQ+ presence. Because of this shift, seriously engaging with and thinking about the images we consume has become more important than ever.

For much of the history of American film, movies couldn’t feature overtly homosexual characters – so homosexuality was coded into a character’s mannerisms and behaviours. This strict code was loosened in the 1960s and 1970s, which also saw the dawn of the women’s and gay rights movements. While gays and lesbians were becoming more visible and vocal in public life, their representation in films was becoming increasingly homophobic. At this time, gay characters were often represented as being dangerous, violent, predatory or suicidal such as in the films The Children’s Hour (1961), The Boys in the Band (1970), Midnight Express (1978) and Vanishing Point (1971).

In the 1990s, Hollywood improved its portrayal of gay and lesbian characters, but films such as The Birdcage; Brokeback Mountain; Philadelphia; and To Wong Foo, Thanks for Everything, Julie Newmar were nearly all “issue” films that focused on the challenges facing LGBTQ+ people. Only in more recent years have more everyday representations of sexual orientation and gender identity become common, as well as representation in children’s movies; it was only in 2020, with Pixar’s Onward, that animated film saw an 2SLGBTQ+ couple portrayed in a way that “doesn’t pause to let it sink in or isolate the moment with a cut for emphasis … [but] passes unremarked, because in this world, it’s accepted as a fact of life.”[i]

There are still limits, however, to how far Hollywood is willing to go in supporting 2SLGBTQ+ films. Director Luca Guadagnino has said that “in order for queer films to be marketable, they must be presented in a way that does not alienate straight audiences.”[ii] Meanwhile, 2SLGBTQ+ filmmakers have succeeded in creating a vibrant underground and alternative film scene. In the ‘90s, New Queer Cinema challenged established notions that 2SLGBTQ+ legitimacy could only come through assimilation into mainstream heterosexual society. Filmmakers such as Gregg Araki, Alexis Arquette, Todd Haynes, Jennie Livingston, Cheryl Dunye, Gus Van Sant, John Waters and John Cameron Mitchell achieved this through the use of heavy irony and an antagonism towards the naturalistic style that dominated cinema at that time. For instance, in Hedwig and the Angry Inch the realism of the story is broken through the use of music, meta-narrative (where characters acknowledge that they’re in a movie), animation and identities that are in constant flux. Today there are 2SLGBTQ+ film festivals all over the world; Canada alone boasts at least eight different film festivals in London, Regina, Vancouver, Winnipeg, Montreal, Kingston, Toronto and Calgary.

Any discussion about portrayals of gays and lesbians on television must consider the commercial demands of the medium. In her article Gay Activists and the Networks, Kathryn Montgomery talked about the process involved in creating a made-for-television movie featuring a gay character in a prominent role at that time. Since the main objective was to reach as wide an audience as possible, various compromises were necessary:

Montgomery concluded that “these requirements served as a filter through which the issue of homosexuality was processed, resulting in a televised picture of gay life designed to be acceptable to the gay community and still palatable to a mass audience.”

Broadcast television relies on generating long term advertising revenue, which means that networks and advertisers are generally looking for programs with as wide appeal as possible. This means that broadcasters are often tentative in their portrayals of 2SLGBTQ+ characters for fear of alienating more conservative audiences. While Will & Grace was a landmark in promoting acceptance of gay characters on television, it had little or no discussion about gay relationships or romance. The two gay characters are friends, not lovers, and they are rarely shown in romantic situations. The primary relationship for both gay men is with the heterosexual female characters. In the same way, the gay couple on Modern Family, while portrayed in a positive light, was also largely desexualized.

Cable television, which provides a wider range of viewing choices (and therefore a more segmented audience) is less beholden to this model, opening the door for programs like Queer as Folk and The L Word that offered a more authentic portrayal of 2SLGBTQ+ lives; streaming has opened the door even further, making it possible for works such as Orange is the New Black and Bojack Horseman to feature trans and asexual lead characters, respectively. That, in turn, has led to further portrayals on network television, including on shows aimed at teens such as Supergirl and even children’s shows such as Ridley Jones (which features a nonbinary bison), She-Ra (whose two lead characters are in a lesbian relationship), PBS mainstay Arthur (which saw the main character’s teacher marry another man) and Muppet Babies (in which Muppet Gonzo was portrayed as gender-nonconforming.) 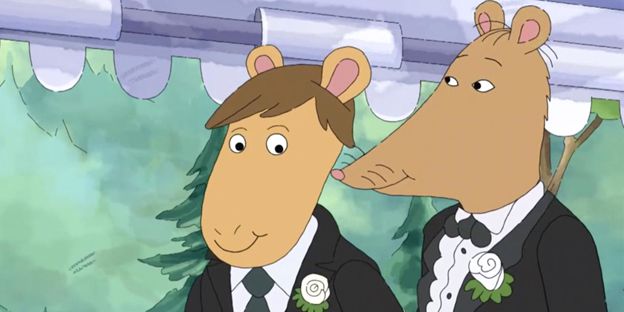 The Arthur episode “Mister Ratburn and the Special Someone.”

However, Rebecca Sugar, creator of the landmark animated series Steven Universe, explains the double standard that is still often applied to straight and queer relationships: “It was a matter of breaking down the false assumption that same-sex romance is somehow inherently more adult, which it’s not. We needed to show, over and over again, that there was nothing less wholesome about these two characters together than any other animated wedding ever aired on Cartoon Network. And so we worked hard to make these characters as cute and lovable as possible, so there’s just no way to deny that they should be married.”[iv]

2SLGBTQ+ representation may also be one area where Canada can genuinely be said to be leading the world, between Schitt’s Creek – in which a pansexual character describes his sexual orientation as liking “the wine, not the label” – and Sort Of, the first Canadian series to feature a non-binary lead. Sort Of also sets a new bar for intersectional portrayals in its representation of a queer South Asian Muslim. Producer and lead actor Bilal Baig describes the goal of authentic representation, saying “There’s immense responsibility and a really exciting celebration around the possibility that this is happening now. I felt the responsibility to honour the character as truthfully as possible … We are never going to watch Sabi agonize over their gender identity, over their sexuality, over their brownness… What they are going to agonize over is: Are the kids okay? Can I repair or salvage my relationship with my mother? Will I ever be loved again? You know, things that we also feel as trans and non-binary people.”[v] 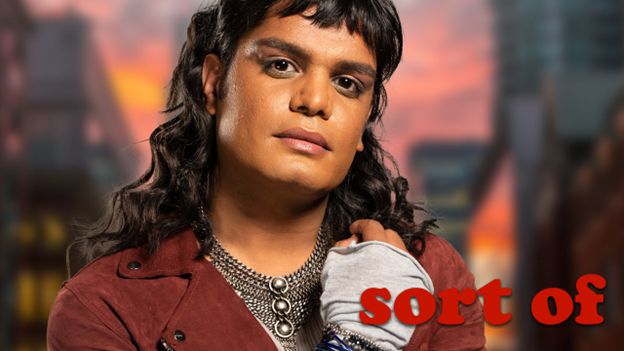 Bilal Baig as Sabi in Sort Of

In 2001, the Canadian Radio-television and Telecommunication Commission (CRTC) granted a broadcasting licence to PrideVision TV, now named OutTV, the world’s first LGBTQ2S+ television channel. Its mandate was to provide programming for the LGBTQ community; after not producing any of its own content several years, OutTV now provides original programming including fully Canadian shows such as Cam Boy and Call Me Mother and co-productions such as the cooking show Wigs in a Blanket.

[ii] Schlichte, G (2017). “‘Call Me by Your Name’ is a gay love story. It should have included gay sex.” The Washington Post. Retrieved from https://www.washingtonpost.com/news/soloish/wp/2017/12/18/why-call-me-by-your-name-should-have-included-gay-sex/

[iv] Opie, D. (2020) “From Kipo and Steven Universe to She-Ra and High School Musical: The Future of Kids’ TV is Queer.” Digital Spy. Retrieved from https://www.digitalspy.com/tv/ustv/a30597831/kids-childrens-tv-lgbtq-queer-kipo-steven-universe-high-school-musical/#

Talking to kids about hate in media
Tip Sheet

Governance of Television and Radio Communications in Canada
Lesson Plan