Despite the popularity of the internet, movies and TV still dominate young people’s media use (though they are increasingly watching both online). [1] Given this widespread appeal, these media may have an indirect effect by influencing how groups or cultures view body image.

An example of this is the TV series Friends, one of the most successful series of the 1990s and still one of the most lucrative streaming shows. Researchers found that watching a ten-minute segment of the show had a negative effect on how satisfied young women were with their appearance. [2] Since the segment shown did not have any content directly related to weight or body image, it seems likely that viewing similar shows would have a similar effect.

One reason for this may be the very small number of women of average or above-average weight found on TV. Researcher Gregory Fouts has found that underweight women are over-represented on TV sitcoms; only 5 per cent of women on sitcoms are overweight. When women of above average weight do appear, they tend to draw negative comments from other characters about their looks. These comments are almost always followed by “canned” laughter, indicating that the audience is expected to agree that these characters are appropriate butts of humour. [3] On Friends, for example, the character of Monica is shown as being overweight in flashbacks – portrayed by the same actress, wearing a “fat suit” – in which her weight is consistently played for laughs. A study of TV comedies aimed specifically at children found a number of average and above-average weight characters that more accurately reflected reality, but some troubling findings as well: first, African-Americans were significantly more likely to be represented as being overweight than White characters; and second, one in four overweight characters was portrayed as being unpopular or as having no friends. [4] 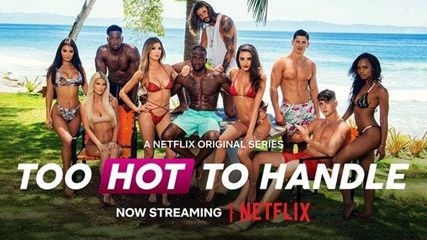 Other genres popular with young people – primetime dramas and reality television – have been shown to have similar effects. By associating thinness with other desirable attributes such as wealth and desirability, dramas such as Grey’s Anatomy reinforce the idea that it’s better to be underweight – a perception that’s found in both girls and boys. [5] Similarly, girls who regularly watch reality television such as Netflix’s popular Too Hot To Handle, in which scantily clad men and women develop relationships without physically touching one another, are significantly more likely to believe that a girl’s looks are the most important thing about her, as well as being more likely to say they would rather people recognize them for their outer beauty than what’s inside. [6]. The relationships made on the show are solely about the physical features of the contestant’s bodies. The purpose of the show is to reveal how hard it is for these people, whom society deems attractive, to abstain from sexual touching; it is only the outer beauty that matters to them, not what’s inside.

Reality shows about weight loss, such as the Biggest Loser, normalize the ideal of changing one’s appearance to “fit in”. [7] These shows reinforce what a lot of women are already thinking according to a 2011 study, which revealed that 80.8% of women experience body dissatisfaction overall, causing them to show a higher interest in having cosmetic surgery. [8]

Movies – including those aimed at young children – fare no better in representing women’s bodies realistically. A 2008 study found that female characters in G-rated animated films were actually more likely to have thin waists and large chests than their counterparts in live-action films – even when compared to characters in R-rated movies. [9]

There are people working for change, both within and outside the TV and film industries. Most notable is the Geena Davis Institute on Gender and Media, which publishes research and resources for parents and teachers aimed at improving how women are portrayed in movies and TV. Their bi-annual Symposium on Gender and Media brings together activists, academics and entertainment industry figures to help improve gender equality in media.