The Canadian Association of Broadcasters report found an “overall lack of coverage of disability issues by television news outlets,” and what coverage there is typically tends to fall into the “victim” or “supercrip” categories: either stories that ask for the viewer’s sympathy or “uplifting” stories of people who have “overcome” their disabilities. It’s significant that the most TV coverage given to persons with disabilities is the Paralympic Games, which – despite the International Paralympic Committee’s efforts to “emphasize… the participants’ athletic achievements rather than their disability” – are almost invariably presented in news coverage as triumph-over-adversity stories.

Portrayals of disability are almost entirely absent in video games, and those few that do exist are nearly always heavily stereotyped. Because of their immersive and interactive qualities, video games have a unique potential to develop empathy and help us understand what it’s like to be someone else, but to date few games have provided players with the ability to experience life with a disability. One notable exception is the Handigo games, developed by Handicap International and game developer Ubisoft, which let players experience life with different disabilities such as vision impairment, mobility impairment and hearing impairment.

Joanne Smith, host of CBC’s Moving On, said after researching a story on persons with disabilities in the media that “I was actually shocked when I spoke to some casting agents and some executive producers specifically about hiring people with disabilities, whether it be for broadcasting or for acting, and I had some people point-blank tell me they didn’t want to hire people with disabilities.” Robert David Hall, best known as medical examiner Doctor Albert Robbins on CSI, has said “I think there’s a fear of litigation, that a person with disabilities might slow a production down, fear that viewers might be uncomfortable…. [but] I’ve made my living as an actor for 30 years and I walk on two artificial legs.” Similarly, shows such as Breaking Bad and Private Practice have employed actors with disabilities in regular cast roles – in both cases, playing characters who were not originally written as having disabilities. Michael Patrick Thornton, a wheelchair user who has a regular role on Private Practice, says that he will be happy when actors with disabilities have the same opportunities as the non-disabled, in roles where “nobody ever mentions the chair.”

The Canadian Association of Broadcasters report found that “there is a lack of participation, particularly with respect to employment, among persons with disabilities in television programming. This was found to be due in large part to a lack of communication and information accessible to persons with disabilities about employment opportunities in the broadcasting industry as a whole.”

In general, persons with disabilities are under-represented in media: the study Where We Are On TV Report: 2010-2011 Season found that only one percent of regular characters on American broadcast TV had one or more disabilities, compared to 12 per cent of the U.S. and Canadian populations. As well, characters with disabilities are most often portrayed by non-disabled actors; of the characters identified in the GLAAD study only one, CSI’s Doctor Robbins, was played by an actor with a disability. 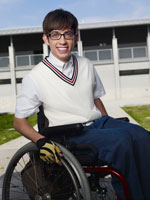 One of the most high-profile portrayals of a person with a disability in recent years is Artie Abrams on Glee. Reaction to the character has been mixed: in general, non-disabled viewers have tended to see him as a positive portrayal of a person with a disability, and Glee was given an award by the Academy of Television Arts and Sciences for exemplifying “television with a conscience.” Many disabled viewers, on the other hand, view Artie as an inaccurate, stereotyped character. Artie is played by Kevin McHale, an actor who is not disabled. In addition, he embodies several common stereotypes: that persons with disabilities are only worthy of being admired if they “overcome” their disability; that persons with disabilities are automatically social outcasts; that persons with disabilities cannot participate in physical activities such as dancing, sports, and acting; and that the strongest emotion in the lives of persons with disabilities is a desire to not have their disability. Of course, all of these stereotypes would be just as bad if Artie were played by a wheelchair user. It seems likely, though, that if he were played by a wheelchair user – or if someone on the production staff had a disability or was familiar with the disabled community – the character would not be so badly stereotyped.