Advertising, particularly for fashion and cosmetics, has a powerful effect on how we see ourselves and how we think we should look. They also have a large influence on body image and dissatisfaction: 50% of ads found in teen magazines use “sexualized beauty” to sell products, creating a mindset from a young age that beauty is defined by looking and acting a certain way. [1] 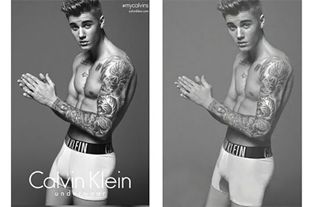 In addition to content, images of women’s – and, increasingly, men’s – bodies also send messages. The average American woman, for example, wears a size fourteen, while the Association of Model Agents recommends that professional models be no larger than a size two.[2]

Even these underweight models are often not seen as being thin enough by editors, who use Photoshop and other image manipulation tools to create women who are literally “too thin to be true” – as well as to alter photos of celebrities so they meet this standard. Men’s images in magazines are also frequently photomanipulated to achieve the lean and muscular ideal.[3] 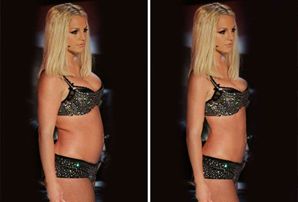 Why is there such pressure to make models increasingly thinner, to the point of erasing whole body parts?[4] Simply put, advertisers believe that thin models sell products. For almost a century, advertisers have appealed to – or contributed to – women’s insecurities in hopes of selling them the solution.[5] In fact, advertising is so strongly associated with creating insecurities that when women are shown images of products such as shoes, perfume or deodorant in the context of fictional ads, they are more likely to answer negatively to questions such as “How attractive do you find yourself?” or “How satisfied are you with your body?” than if they saw the same photos in a neutral context.[6]

While it’s well-established that seeing images of underweight women make normal or overweight women feel bad about themselves,[7] some recent research has found that that the conventional wisdom in the fashion and advertising worlds is wrong, and that consumers are less interested in buying products that make them feel insecure. (The same research, though, found that exposure to overweight models had a similar negative effect on women’s self-esteem.) [8] 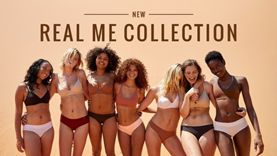 In recent years there have been some efforts in the magazine industry to buck the trend. For several years, the Quebec magazine Coup de Pouce has consistently included full-sized women in their fashion pages and Châtelaine has pledged not to touch up photos or to include models younger than 25 years of age. [9] Some clothing retailers have also committed to not using underweight models, most notably Aerie.. In 2014, Aerie pledged not to retouch any of their images used in advertisements for their clothes as a part of their #AerieREAL campaign. This shift in advertising caused their profits to spike 26% in 2016, suggesting that this trend mirrors a shift in global perspectives regarding body image. [10]

There is resistance to change, both within and outside the industry. When the Australian magazine New Woman included a picture of a heavy-set model on its cover, it received a truckload of letters from grateful readers praising the move, but its advertisers complained and the magazine returned to featuring bone-thin models.[11] According to Kirstie Clements, the former editor of Australian Vogue, this response is not unusual: “[editors] get so caught up in the hype of how brilliant clothes look on a size 4, they cannot see the inherent danger in the message…Many high fashion labels are aghast at the idea of producing a size 14, and they certainly wouldn’t want to see it displayed in the pages of the glossies.”[12]

Online influencers are another form of advertising and source of body image issues for teens. Some social networks popular with teens have taken steps to address this. Instagram, for example, changed its policies in 2019 to stop the promotion of weight loss products and cosmetic procedures. Emma Collins, Instagram’s public policy manager stated, “we want Instagram to be a positive place for everyone that uses it and this policy is part of our ongoing work to reduce the pressure that people can sometimes feel as a result of social media.” Whether or not they’re promoting weight loss products, though, constant exposure to ideal – and frequently photomanipulated – images of men and women’s bodies has an impact, even when viewers are aware that the images have been altered. [13] Unlike traditional advertising, influencer ads are viewed alongside pictures of a young person’s peers, which have a similar effect on views of one’s own body. [14] As a result, many adolescents feel the only way to achieve this “model status” is to use diet products advertised to them online that show digitally manipulated models they strive to look like.[15]

[2] Jones B. (2017) Model Diversity in Fashion Advertising: The Influence of Self-Model Congruity on Body Appreciation. University of Minnesota.

[5] Copeland, Libby. “How advertisers create body anxieties women didn’t know they had and then sell them the solution.” Slate, April 14, 2011.

[6] “The Self-Activation Effect of Advertisements: Ads Can Affect Whether and How Consumers Think About the Self,” by Debra Trampe, Diederik A. Stapel and Frans W. Siero, The Journal of Consumer Research.

[9] Schlossberg, M (2016) These unretouched photos show why a teen retailer is giving Victoria’s Secret a run for its money. Business Insider. Retrieved from https://www.businessinsider.com/aerie-ad-photos-are-not-airbrushed-2015-7

Co-Co's AdverSmarts: An Interactive Unit on Food Marketing on the Web
Game

Can You Spot the Ad?
Lesson Plan