This report is drawn from a national survey of Canadian youth conducted by MediaSmarts in 2013. The classroom-based survey of 5,436 students in grades 4 through 11, in every province and territory, examined the role of networked technologies in young people’s lives. Sexuality and Romantic Relationships in the Digital Age (the fifth in a series of reports from the survey) examines issues such as sexting, romantic interactions online, and accessing pornography and information about sexuality.

Young Canadians in a Wired World, Phase III: Sexuality and Romantic Relationships in the Digital Age was made possible by financial contributions from the Canadian Internet Registration Authority, the Office of the Privacy Commissioner of Canada and The Alberta Teachers’ Association.

Sexuality and Romantic Relationships in the Digital Age Infographic

Share the Sexuality and Romantic Relationships in the Digital Age infographic using the share icons above, tweeting using the hashtag #YCWW, and posting the infographic on your website using the embed code below. 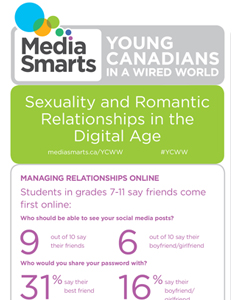 Sexuality and Romantic Relationships in the Digital Age slideshow

About Young Canadians in a Wired World

Initiated in 2000 by MediaSmarts, Young Canadians in a Wired World (YCWW) is the most comprehensive and wide-ranging study of children’s and teens’ Internet use in Canada. Phase I and Phase II of this ongoing research project – which tracks and investigates the behaviours, attitudes and opinions of Canadian children and youth with respect to their use of the Internet – were conducted in 2001 and 2005. In 2011, MediaSmarts launched Phase III of the YCWW study with qualitative research comprising interviews with teachers from across Canada and focus groups with children and youth and parents, followed by a national classroom survey in 2013.

Young Canadians in a Wireless World

Talking to Youth and Parents about Online Resiliency