Few industries have been changed as deeply by the advent of the Internet as journalism, and those changes are reflected in our experience as news consumers. Where news consumers once relied on a limited number of outlets that each provided a specialized selection of news items – different papers or newscasts for local and national news, for example, or radio for traffic and weather – we now have access to an array of sources that is at once overwhelming and empowering. In particular, the ability to share links to news stories through social media means that we rely less on news outlets to curate content and more on filters that we created either knowingly (by Liking or following news outlets, individual reporters, or others who find and share news) or unknowingly (through the algorithms that social networks and search engines use to track which items we’ve responded to most strongly). As a result, “we are moving toward a world of passive news reception where the news and information we consume is determined more by what others in our networks share and the decisions we have made to curate our own newsfeeds than by editorial decisions in newspaper or broadcast TV newsrooms.”[2]

Jessica Thom’s study of Canadian young adults and news found that social media was how they most often found out about a news story; if the story was particularly interesting they might follow it to its original source or turn to a search engine to find other stories on the same topic.

One result of this is that there is less of an assumption that the news you are receiving has been fact-checked, or that it comes from an objective source: Canadians are twice as likely to say they trust traditional media sources more than social media.[3] While traditional media remain the most trusted sources of news, though, trust in them has declined significantly, both in Canada and around the world. Some researchers have suggested that this decline has its roots not just in the spread of news through social media but also in changes in the news industry going back to the 1990s:

As the 24-hour news cycle forces media organizations to fill more time with content, they are forced to shift away from reporting strictly the facts (of which there are only so many) to providing commentary, increasing the volume of opinion over that of fact and blurring the distinction between the two. Furthermore, analysis of the media market suggests that, for the sake of profits, media organizations have an incentive to cater their coverage to audience biases, essentially providing the types of news stories that people want and agree with, rather than focusing on providing high-quality and objective news coverage.[4]

A related factor that has hurt mainstream news sources’ credibility is their own use of online news sources: the pressure to constantly produce new, engaging content means that

mainstream news organizations frequently source stories directly from Twitter, or from blogs… [that] are deeply incentivized to produce a constant stream of new content, since they are dependent on page views and the most captivating blogs are those that update frequently. New and old media alike employ software that provides detailed data that shows exactly which articles get the most clicks, shares, likes, and comments. This allows newspapers and blogs to tailor future content to drive their metrics up, incentivizing low-quality but high-performing posts over high-quality journalism.[5]

This decline in the perceived credibility of traditional news sources, along with simple convenience, may explain why Canadians are more likely to get their news from sources they find less trustworthy:[6] 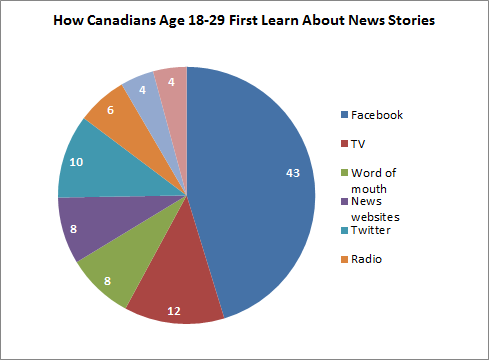 A further complication is that fewer than one in ten Canadians pay for the online news they access, and a quarter of those – perhaps those who are aware of the data collection techniques described above – use ad blockers when browsing ad-supported sites.[7] It could be argued that we get the news we deserve: as Madelaine Drohan puts it, “the financial constraints on media organizations have had a negative impact on working conditions for journalists… The inevitable result is poorer journalism, fewer voices contributing to the public debate and a loss of loyal readers, viewers and listeners.”[8]

We are all broadcasters
Tip Sheet

Stay on the Path Lesson One: Searching for Treasure
Lesson Plan