No, it’s not your imagination. The amount of advertising and marketing North Americans are exposed to daily has exploded over the past decade; studies show, that on average, people living in urban centres see up to 5,000 ads per day. [1] At the gas pumps, in the movie theatre, in a washroom stall, on stickers on fruit, during sporting events—advertising is pretty much impossible to avoid.

The challenge of the future may be finding public and private spaces that are free of advertising.

Marketers are pressed to find even more innovative and aggressive ways to cut through the “ad clutter” or “ad fatigue” of modern life. For example, QR (Quick Response) Codes on billboards, Web pages and even clothing attempt to engage consumers by transferring enhanced ads in the form of movie trailers, coupons, or directions to nearby retailers onto their cell phones.

Here’s an overview of some of the ways marketers are targeting us:

Ambient advertising refers to intrusive ads in public places. With the cost of traditional media advertising skyrocketing and a glut of ads fighting for consumers’ attention, marketers are aggressively seeking out new advertising vehicles. Cars, bicycles, taxis and buses have become moving commercials. Ambient ads appear on store floors, at gas pumps, in washrooms stalls, on elevator walls, park benches, telephones, fruit and pressed into the sand on beaches.

Some members of the advertising industry are critical of this trend to slap ads on everything. Bob Garfield, columnist for the ad industry magazine Advertising Age, calls this plethora of commercial messages “environment pollutants.” Others worry that this deluge of advertising will create a backlash with consumers.

Marketers are moving away from the traditional use of celebrities as product hucksters, since a cynical public no longer believes that celebrities actually use what they endorse in commercials. The trend now is to brand celebrities with specific merchandise by having them use or wear products in public appearances or promote them in media interviews—without making it clear that the celebrities are paid spokespeople.

Targeted ads are a form of Internet marketing. Using sophisticated data collecting technologies, websites can combine a user’s personal information with surfing preferences to create ads that are specifically tailored for that user.

A wave of media mergers over the past decade has produced a handful of powerful conglomerates that now own all the major film studios, TV networks, radio and television stations, cable channels, Internet companies, book and magazine publishing and music companies. These giant conglomerates use their various media holdings to promote products and artists through massive cross-promotional campaigns.

For example, when the world’s largest entertainment conglomerate AOL Time Warner was preparing the release of the film Harry Potter and the Sorcerer’s Stone, it enlisted all its various media divisions—cable systems, speciality channels, TV networks, magazines and Internet companies—to help mass-market the movie and the spin-off merchandise.

In 2012, Lionsgate films created a huge social marketing campaign for the film The Hunger Games that utilized many different products and services. In addition to the standard Twitter, YouTube, Tumblr and Facebook initiatives (that included 13 pages for each of the districts in the book), the campaign also featured a Facebook game, an HTML5 demo site created with Microsoft, and an iOS game from the developer of Canabalt. By the time the film premiered, it had six and a half million “followers” across various platforms. [2]

The future of product placement as a successful advertising tool was assured when the 1982 film ET featured Reese’s Pieces in a pivotal scene—causing sales of the candy to jump 65 per cent. Since that time, product placement in movies, on TV, and increasingly in video games, has become a commonplace marketing technique that has become a specialised advertising field in its own right. 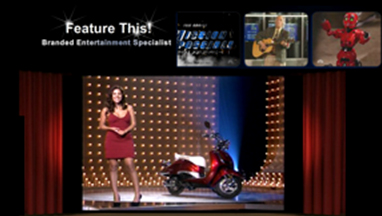 The marketing company FeatureThis extols the virtues of product placement for potential clients, on its website: “Break through the cluttered media entertainment environment inexpensively,” it claims. “Product placement in feature films and television reaches millions of consumers, over and over again.”

With the advent of technologies such as TiVo, which allow consumers to edit out TV commercials, product placement is taking on an even greater importance. To counter this, TV producers are always looking for new ways to integrate advertising and content. Basing an entire show around a product is one technique; giving viewers the capability of immediately purchasing products featured on the program is another.

Ten years ago the notion of being able to order the pair of pants that your favourite TV star is wearing, merely by clicking on them, seemed futuristic. However, the advent of interactive television — with its potential for directly linking television viewers with products — is now a reality and is being heralded as the next significant frontier for advertisers. In 2011 the Interactive Advertising Bureau estimated that over 200 million consumers can now use their TV remote control to engage in a two-way dialogue with brands. [3]

And, of course, the Internet is still the main driver for creating complete immersive environments built around brands: from advergames based on brand characters associated with kids products, to social networking pages dedicated to Captain Morgan (of Captain Morgan Rum fame) immersive advertising is seen as a goldmine for reaching consumers of all ages—especially children and youth.

sing goes one step further than product placement by using computer technology to add products to scenes that were never there to begin with. This practice is common in sporting events coverage, where ads are digitally inserted onto the billboards, sideboards and playing surfaces in arenas and stadiums.

While digital ads are mainly used in sports coverage, virtual advertising is starting to break into the entertainment world as producers digitally insert products into TV scenes after the scenes are shot. The technology also allows product names to be altered in scenes, creating the potential for new advertising revenues when series are sold into syndication.

On The Loose: A Guide to Life Online For Post-Secondary Students
Guide