Photo manipulation, once the preserve of a small number of airbrush-equipped artists, has become commonplace in the fashion, publishing and advertising industries thanks to the introduction of photo-editing software such as Photoshop. (This program, first introduced in 1990, has become so widely used that “photoshopping” is often used as a synonym for photo manipulation.) As a result, heavily retouched photos – of men as well as women [1] – have become nearly universal: a single issue of Vogue was found to contain 144 manipulated images, including the cover. [2]

As photo manipulation tools have become more widely available and easier to use, youth have begun turning to them to modify their own photos to meet media-created ideals of thinness and perfection.

Retouching photos in this way raises a number of concerns. One is that the already unrealistic bodies youth are exposed to are made literally impossible – models frequently have collarbones, ribs and even hips erased to make them look thinner [3] – guaranteeing that even those who meet media standards of attractiveness will still be left feeling inadequate. (This is a Digital Age twist on the old “ring around the collar” tactic of creating anxieties that consumers didn’t know they had.) [4] In some cases, real women’s bodies have been abandoned completely, as in the ads created for retailer H&M that put models’ heads onto computer-generated bodies. [5] 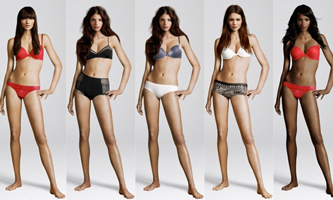 As well, photo manipulation reduces the number of different body shapes represented in media, pushing everyone to a single standard: even Keira Knightley, who is very slender, had her breasts digitally enhanced in the poster for her movie King Arthur. [6] Singer Adele was reportedly retouched to look thinner on the March 2012 issue of Vogue, which provoked a controversy due to her previous statements such as “I’ve never seen magazine covers and seen music videos and been like, ‘I need to look like that if I want to be a success’”[7]  as well as editor Anna Wintour’s claims that the magazine does not manipulate photos to make models look thinner. [8]

Both of these issues may lead to negative effects on young people’s self-image and self-esteem: in 2011 the American Medical Association urged governments and industry bodies to stop retouching models, warning “we must stop exposing impressionable children and teenagers to advertisements portraying models with body types only attainable with the help of photo editing software.” [9]

It’s hardly a secret that many bodies seen in media are digitally manipulated: a 2011 study found that 84 per cent of British young women knew what photo manipulation was and how it was used, and the same number agreed that using it to change models’ bodies should be unacceptable. [10] Unfortunately, just knowing that images are manipulated doesn’t defuse their effects. As Dr. Kim Bissell, founder of the Child Media Lab at the University of Alabama, puts it, “We know they’re Photoshopped, but we still want to look like that.” [11] In fact, young girls often use photo manipulation software to retouch their own photos. Connie Morrison, in her book Who Do They Think They Are? Teenage Girls & Their Avatars in Spaces of Social Online Communication, says “girls understand that the images on television and in magazines are manipulated, and for some this understanding seems to lead to an expectation that they can (or should) be doing the same.” As one of the girls she interviews puts it, “It makes me more comfortable… when my profile picture is something that looks flawless and ‘pretty’ even though I know it’s fake.” [12]

Connected to Learn: Teachers' Experiences with Networked Technologies in the Classroom
Blog entry