Skip to main content
Submitted by Matthew Johnson on 05 Aug 2016.

In ancient times the Olympics were a time when all nations – all Greek nations, anyway – would put away their differences and compete in almost every human activity, from poetry to the ferocious no-rules wrestling event called pankration. Being the very best that humans could be was seen as the best way to honour the gods of Olympus. Though we’ve dropped the poetry and the blood sports, people watching the swimming or volleyball events might wonder if we’re on the way to bringing back the ancient tradition of competing in the nude. Revealing outfits – like those designed by Lululemon for the Canadian beach volleyball team – may be practical for those events, but they also shine a light on how dressing for sports can make us feel about ourselves. After all, it’s hard to feel good about your own body when you’ve just spent an hour watching the most perfect physiques in the world nearly naked. 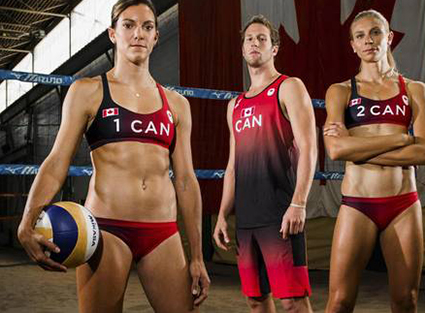 Image courtesy of Mark Blinch, for The Globe and Mail

What might be heartening or discouraging, depending on your mood, is that many world-class athletes have the same problems with their body image. Canadian trampoline gymnast Rosie MacLennan, despite being one of the top competitors in the world, told CBC Sports that she felt inadequate when she compared herself to her peers. Male athletes aren’t immune, either: U.S. swimmer Cody Miller has said that he was afraid to take off his shirt in gym class due to a condition that gave him a sunken dent in his chest.

If even the world’s best athletes feel insecure about their bodies, it’s not surprising that young people do as well, especially during swimsuit season. We know that they feel a lot of pressure to look perfect, especially when they post pictures of themselves on social networks like Instagram and Snapchat where they and their friends use filters, artful poses and photo editing to create the illusion of perfection.

Here are some tips for talking to your kids about body image issues:

Girls are most likely to compare their bodies to those of celebrities (such as athletes). This can start a lot earlier than you might think! If you have a preteen daughter, ask her:

If you have a teen or tween daughter who’s using social media, you can ask them the following questions:

Girls are also under pressure to look not just thin but sexy, too, and athletes are no exception: female athletes are often photographed in what Professor Pat Griffin calls “hyper-sexualized poses.” Griffin notes, “When it was once enough to feminize women athletes, now it is necessary to sexualize them for men. Instead of hearing, ‘I am woman, hear me roar,’ we are hearing ‘I am hetero-sexy, watch me strip.’”

Boys seem to be suffering more and more from body image issues as they’re exposed to more and more idealized images of male bodies. Just like girls, this can happen very early: a GI Joe toy released in 1995 had biceps 27 inches around, larger than any bodybuilder that’s ever lived. If you have a younger son who plays with a toy whose body is exaggerated, or watches cartoons with hyper muscled characters, you can ask the following questions while playing with them:

Teen and tween boys often feel pressured if they are ‘undersized’ and feel the need to gain muscle mass to their bodies. As their bodies start to mature, the differences between their body shapes increase, which can put a lot of pressure on teens to avoid being either too heavy or too thin. They also tend to consume media – especially video games – with highly over-muscular and very tough, violent characters. Here are some teachable moments that may help your child with body acceptance:

The good news is that parents can make a huge different by being positive and supportive of their kids and by setting a good example when it comes to body shape and fitness. We can also help by teaching them how to understand media messages about how we should look. Parents who engage in media alongside their children, and who encourage them to question or think about what they see or hear are setting the groundwork for healthy media habits. As the world comes together this summer, take time to teach your kids to ‘talk back’ to media through creative play, art and writing to help them work through the media messages they receive, and take charge of representations of themselves.